Pre-order your signed copy from One More Page Books and also receive a set of character cards designed by Mars Lauderbaugh! 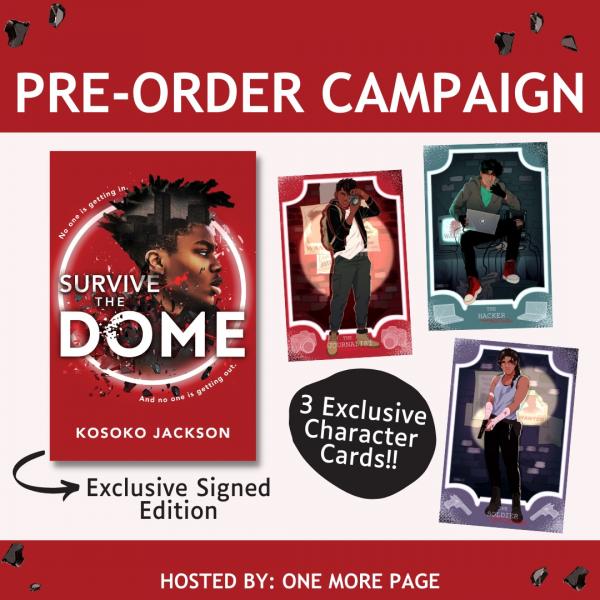 The Hate U Give meets Internment in this pulse-pounding thriller about an impenetrable dome around Baltimore that is keeping the residents in and information from going out during a city-wide protest.

Jamal Lawson just wanted to be a part of something. As an aspiring journalist, he packs up his camera and heads to Baltimore to document a rally protesting police brutality after another Black man is murdered.

But before it even really begins, the city implements a new safety protocol...the Dome. The Dome surrounds the city, forcing those within to subscribe to a total militarized shutdown. No one can get in, and no one can get out.

Alone in a strange place, Jamal doesn't know where to turn...until he meets hacker Marco, who knows more than he lets on, and Catherine, an AWOL basic-training-graduate, whose parents helped build the initial plans for the Dome.

As unrest inside of Baltimore grows throughout the days-long lockdown, Marco, Catherine, and Jamal take the fight directly to the chief of police. But the city is corrupt from the inside out, and it's going to take everything they have to survive.

Born and raised in the DC Metro Area, Kosoko Jackson has spent 6+ years working in digital communications; which enables his Twitter obsession. When not searching for an extra hour in the day, he can be found obsessing over movies or drinking his (umpteenth) iced London Fog. He is the author of Survive the Dome and Yesterday is History. Visit him at kosokojackson.com.