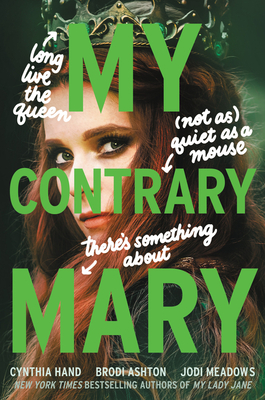 ***Your order from One More Page will include a signed bookplate from the authors! We have plenty of bookplates, so if you'd like a signed copy of another Lady Janies book (or a hardcover instead of paperback), add the regular edition of the book to your order and leave a comment asking for a bookplate to be included.***

Long live the queen: The authors who brought you the New York Times bestselling My Lady Jane kick off an all-new historical trilogy with the classy, courtly tale of Mary, Queen of Scots.

Welcome to Renaissance France, a place of poison and plots, of beauties and beasts, of mice and . . . queens?

Mary is the queen of Scotland and the jewel of the French court. Except when she’s a mouse. Yes, reader, Mary is an Eðian (shapeshifter) in a kingdom where Verities rule. It’s a secret that could cost her a head—or a tail.

Luckily, Mary has a confidant in her betrothed, Francis. But things at the gilded court take a treacherous turn after the king meets a suspicious end. Thrust onto the throne, Mary and Francis face a viper’s nest of conspiracies, traps, and treason. And if Mary’s secret is revealed, heads are bound to roll.

With a royally clever sense of humor, Cynthia Hand, Brodi Ashton, and Jodi Meadows continue their campaign to turn history on its head in this YA fantasy that’s perfect for fans of A Gentleman’s Guide to Vice and Virtue.