Love and Latkes - with signed bookplate - by Stacey Agdern 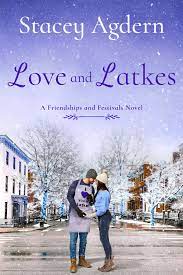 The Third in the series of ​Friendship and Festivals.

You can’t make a latke without breaking a few eggs…

Batya Averman is ecstatic when a latke fry-off committee chooses her as its web designer—until she learns the event is in Rivertown, New York, the hometown she fled years ago. But she’s no longer the girl with an embarrassing history and an unrequited crush on Abe Neumann. This delicious competition is Batya’s chance to further her career, and this time she won’t run.

Abe Neumann can’t pass up the opportunity to enter the town’s latke contest. He dreams of throwing caution to the wind and leaving his accounting firm, opening a Jewish deli, and choosing his own happiness. The prize money would bring him closer to making his dream a reality, but when Batya comes back to town, Abe remembers that a deli isn’t the only thing he’s wished for.

When the fry-off’s celebrity host has to pull out of the competition, Batya is determined to step up to the challenge. This Hanukkah, can Abe fix the past and convince Batya that dreams, like latkes, are better when they’re shared?

Stacey Agdern has written for: ‘HEA' (Happily Ever After) USA today’s online romance blog, Heroes and Heartbreakers, Criminal Element, Romance at Random, Romantic Times Magazine and Barbara Vey’, Beyond Her Book, column at Publishers Weekly Online Site.  She has been interviewed by the New York Times for her romance genre expertise and the phenomenal success of 50 Shades of Grey.  She has also given presentations on the effective use of booksellers at regional and national conferences and is a two time award winner for her genre specific book selling. She is a very proud member of both LIRW and RWA NYC where she previously held the chapter position of Vice President for one term. She lives not very far from her favorite hockey team’s practice facility in New York City.