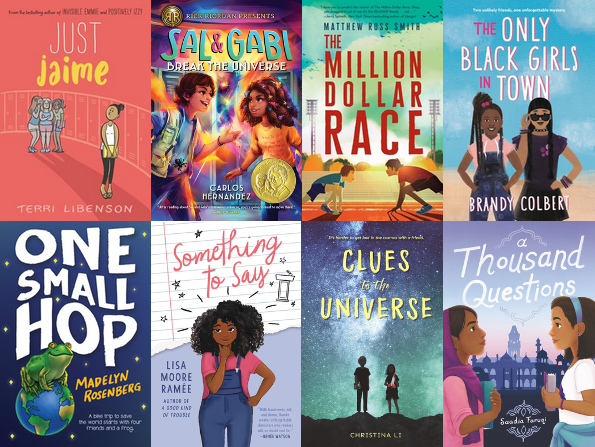 The Summer Book Club is open to kids ages 6 to 14. Children may read some or all of the books on our list.

To join the club, children must be registered by a parent or guardian, who must fill out our form by August 1.

Buy all 8 books in a bundle with this link, or browse the individual titles below!

Clues to the Universe

The only thing Rosalind Ling Geraghty loves more than watching NASA launches with her dad is building rockets with him. When he dies unexpectedly, all Ro has left of him is an unfinished model rocket they had been working on together. Benjamin Burns doesn't like science, but he can't get enough of Spacebound, a popular comic book series. When he finds a sketch that suggests that his dad created the comics, he's thrilled. Too bad his dad walked out years ago, and Benji has no way to contact him. Though Ro and Benji were only supposed to be science class partners, the pair become unlikely friends: Benji helps Ro finish her rocket, and Ro figures out a way to reunite Benji and his dad. But Benji hesitates, which infuriates Ro. Doesn't he realize how much Ro wishes she could be in his place? As the two face bullying, grief, and their own differences, Benji and Ro must try to piece together clues to some of the biggest questions in the universe.

The last day of seventh grade has Jaime and Maya wondering who their real friends are.

Jaime knows something is off with her friend group. They've started to exclude her and make fun of the way she dresses and the things she likes. At least she can count on her BFF, Maya, to have her back...right?

Maya feels more and more annoyed with Jaime, who seems babyish compared to the other girls in their popular group. It's like she has nothing in common with Jai anymore. Are their days as BFFs numbered...?

Perfect for fans of Raina Telgemeier and Jennifer L. Holm.

Perfect for fans of Lizzy Legend and the Baseball Genius series, this quick-paced, heartfelt, and zany novel follows a speedy kid from an unconventional family who will do whatever it takes to win an international track contest.

Grant Falloon isn't just good at track; he's close to breaking the world record 100-meter time for his age group. So when the mega-rich Babblemoney sneaker company announces an international competition to find the fastest kid in the world, he's desperate to sign up.

But not so fast. Nothing's ever that easy with the eccentric Falloon family. Turns out, his non-conformist parents never got him a legal birth certificate. He can't race for the United States, so now if he wants to compete, he may just have to invent his own country.

And even if that crazy plan works, winning gold will mean knocking his best friend--and biggest competitor--Jay, out of the competition. As unexpected hurdles arise, Grant will have to ask not only if winning is possible, but what he's willing to sacrifice for it.

Ahab Goldstein is a seventh-grader living in an United States (specifically Maine) where the environment has turned toxic, and the corrupt Environmental Police Force is in control, limiting access to natural resources like gas and water, issuing fines, and transporting "fragile" species (pretty much all of them) to the Center for Species Rehabilitation in New Arcadia (a dubious refuge at best); so when Ahab and his friends find a real live bullfrog on an island in the toxic harbor, possibly the last one in America, they are faced with a choice--turn it over (NO!), leave it alone, or bike to Canada to find it a mate.

The Only Black Girls in Town

From award-winning YA author Brandy Colbert comes a debut middle-grade novel about the only two Black girls in town who discover a collection of hidden journals revealing shocking secrets of the past.

Beach-loving surfer Alberta has been the only Black girl in town for years. Alberta's best friend, Laramie, is the closest thing she has to a sister, but there are some things even Laramie can't understand. When the bed and breakfast across the street finds new owners, Alberta is ecstatic to learn the family is black--and they have a 12-year-old daughter just like her.

Alberta is positive she and the new girl, Edie, will be fast friends. But while Alberta loves being a California girl, Edie misses her native Brooklyn and finds it hard to adapt to small-town living.

When the girls discover a box of old journals in Edie's attic, they team up to figure out exactly who's behind them and why they got left behind. Soon they discover shocking and painful secrets of the past and learn that nothing is quite what it seems.

Sal and Gabi Break the Universe

What would you do if you had the power to reach through time and space and retrieve anything you want, including your mother, who is no longer living (in this universe, anyway)?

When Sal Vidon meets Gabi Real for the first time, it isn't under the best of circumstances. Sal is in the principal's office for the third time in three days, and it's still the first week of school. Gabi, student council president and editor of the school paper, is there to support her friend Yasmany, who just picked a fight with Sal. She is determined to prove that somehow, Sal planted a raw chicken in Yasmany's locker, even though nobody saw him do it and the bloody poultry has since mysteriously disappeared.

Sal prides himself on being an excellent magician, but for this sleight of hand, he relied on a talent no one would guess . . . except maybe Gabi, whose sharp eyes never miss a trick. When Gabi learns that he's capable of conjuring things much bigger than a chicken--including his dead mother--and she takes it all in stride, Sal knows that she is someone he can work with. There's only one slight problem: their manipulation of time and space could put the entire universe at risk.

A sassy entropy sweeper, a documentary about wedgies, a principal who wears a Venetian bauta mask, and heaping platefuls of Cuban food are just some of the delights that await in his mind-blowing novel gift-wrapped in love and laughter.

From the author of A Good Kind of Trouble, a Walter Dean Myers Honor Book, comes another unforgettable story about finding your voice--and finding your people. Perfect for fans of Sharon Draper, Meg Medina, and Jason Reynolds.

Eleven-year-old Jenae doesn't have any friends--and she's just fine with that. She's so good at being invisible in school, it's almost like she has a superpower, like her idol, Astrid Dane. At home, Jenae has plenty of company, like her no-nonsense mama; her older brother, Malcolm, who is home from college after a basketball injury; and her beloved grandpa, Gee.

Then a new student shows up at school--a boy named Aubrey with fiery red hair and a smile that won't quit. Jenae can't figure out why he keeps popping up everywhere she goes. The more she tries to push him away, the more he seems determined to be her friend. Despite herself, Jenae starts getting used to having him around.

But when the two are paired up for a class debate about the proposed name change for their school, Jenae knows this new friendship has an expiration date. Aubrey is desperate to win and earn a coveted spot on the debate team.

There's just one problem: Jenae would do almost anything to avoid speaking up in front of an audience--including risking the first real friendship she's ever had.

Set against the backdrop of Karachi, Pakistan, Saadia Faruqi's tender and honest middle grade novel tells the story of two girls navigating a summer of change and family upheaval with kind hearts, big dreams, and all the right questions.

Mimi is not thrilled to be spending her summer in Karachi, Pakistan, with grandparents she's never met. Secretly, she wishes to find her long-absent father, and plans to write to him in her beautiful new journal.

The cook's daughter, Sakina, still hasn't told her parents that she'll be accepted to school only if she can improve her English test score--but then, how could her family possibly afford to lose the money she earns working with her Abba in a rich family's kitchen?

Although the girls seem totally incompatible at first, as the summer goes on, Sakina and Mimi realize that they have plenty in common--and that they each need the other to get what they want most.

The Only Black Girls in Town (Paperback)

Clues to the Universe (Hardcover)

Something to Say (Paperback)