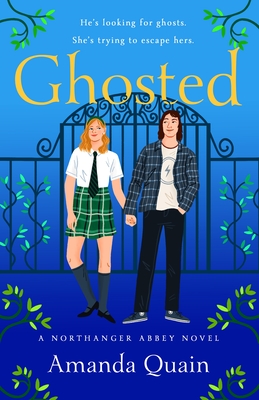 Never Have I Ever meets The X-Files in Amanda Quain's Ghosted, a gender-bent contemporary retelling of the Jane Austen classic, Northanger Abbey.

Hattie Tilney isn’t a believer. Yes, she’s a senior at America’s most (allegedly) haunted high school, Northanger Abbey. But ever since her paranormal-loving dad passed away, she’s hung up her Ghostbusters suit, put away the EMF detectors and thermal cameras, and moved on. She has enough to worry about in the land of the living--like taking care of her younger brother, Liam, while their older sister spirals out and their mother, Northanger’s formidable headmistress, buries herself in her work. If Hattie just works hard enough and keeps that overachiever mask on tight through graduation, maybe her mom will finally notice her.

But the mask starts slipping when Hattie’s assigned to be an ambassador to Kit Morland, a golden retriever of a boy who’s transferred to Northanger on—what else—a ghost-hunting scholarship. The two are partnered up for an investigative project on the school’s paranormal activity, and Hattie quickly strikes a deal: Kit will present whatever ghostly evidence he can find to prove that campus is haunted, and Hattie will prove that it’s not. But as they explore the abandoned tunnels and foggy graveyards of Northanger, Hattie starts to realize that Kit might be the kind of person that makes her want to believe in something—and someone—for the first time.

With her signature wit and slow burn romance, Amanda Quain turns another Austen classic on its head in this sparkling retelling that proves sometimes the ghosts are just a metaphor after all.