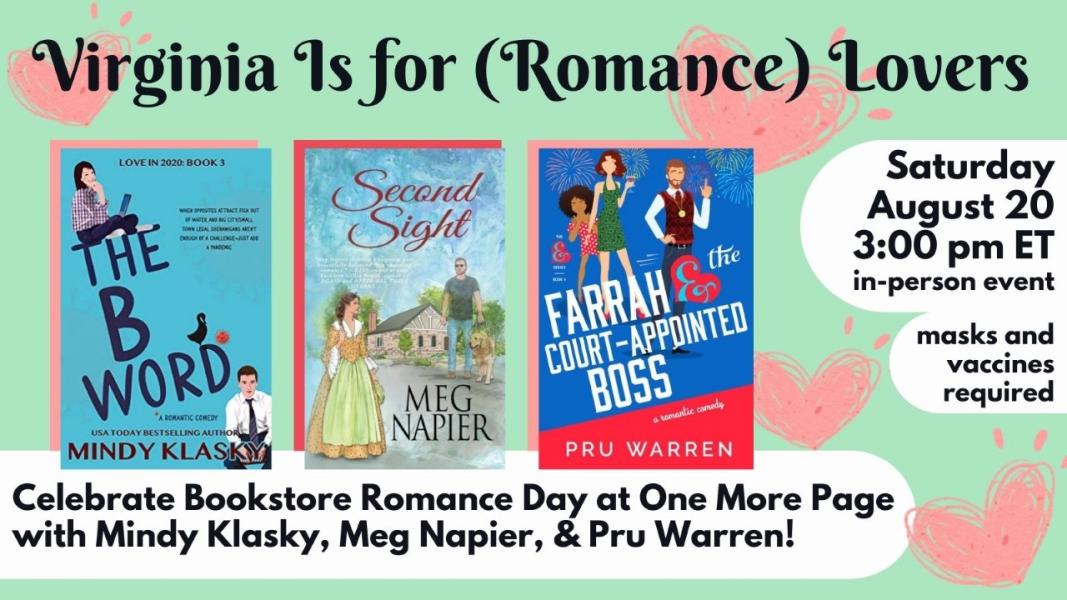 Celebrate Bookstore Romance Day with three outstanding Northern Virginia-based romance authors as they discuss all things writing, romance, and happily ever afters! Their conversation will be followed by a book signing.

Our current event capacity limit is 40 people, so please register to be sure you get in. Proof of COVID vaccination will be required at the door. (See the Eventbrite registration page for more about our COVID precautions.) If Covid protocols change, we will update them here.

***Please note that all in-store events require proof of vaccination (a photo is fine), and attendees are required to wear masks while inside the store. Authors may remove their masks during the presentation at their discretion.

THE B WORD by Mindy Klasky:

When opposites attract, fish out of water, and big city/small town legal shenanigans aren’t enough of a challenge—just add a pandemic!

Lawyer Emily Holcomb is up for partner just as she’s appearing on a blockbuster reality TV cooking show. Extroverted Emily only has to wrap up a mammoth real estate deal in tiny Black Duck, West Virginia, and her dream career will be secured.

But Liam Thomas, the reluctant mayor of Black Duck, is determined to see Emily fail. The calm, reserved mountain man has a town to protect from invading corporate interests.

Emily is a fish out of water in small town Black Duck. Liam is equally at odds with life in big city Washington, DC. But opposites attract—and this attraction burns hotter than Emily and Liam’s arguments over who should own the town.

How can these star-crossed lovers remain true to themselves and the people who depend on them when they can’t even agree on what to eat for dinner?

Can love between two souls be so strong that it withstands the tragic death sentence of history to rise again in a more auspicious time and place? And if so, what if those two unknowing souls are so wary of disappointment that they refuse to see the possibility of a new beginning?

The spark between Stephen, a British major loyal to King George, and Katrina, who believes her fellow colonists are justified in rebellion, is instantaneous, joyous, and all-consuming. Katrina's family despises her relationship with the hated Redcoat, but the two find such happiness in each other's arms that they believe their love can survive any difficulty. Amidst the beauty of the Hudson Valley and the looming threat of war, they cling to each other and to the hope that both sides will see reason.

Fast forward 250 years. Etienne and Catherine are determined to avoid the entanglements and pain that love and relationships can cause. Safe in her predictable suburban life and content with her work, Catherine wants nothing to do with passion or commitment. Angry and resentful after a terrorist bombing steals his eyesight and derails his career as a photojournalist, Etienne tries to retreat further behind the walls he's always had in place around his heart. As soon as the two meet, however, the barriers they have so carefully constructed are eroded by passion, laughter, and a strangely instantaneous intimacy. When dangerous choices threaten to tear them apart in an echo of Stephen and Katrina's fate, Catherine and Etienne are forced to choose: is it better to remain safe and alone, or to risk everything for love?

When a carefree party girl comes up against a determined virgin, sparks fly!

Farrah's family has gotten her out of countless scrapes. But when a judge refuses to overlook the fact that she shot illegal fireworks into a school (oops), Farrah is forced to return to the nightmare she thought she was ten years past: Back to high school. It's too much to bear without a martini. Wait-no drinking too?!

Michael is a guidance counselor and a determined advocate for virginity. The last thing he needs is red-headed chaos assigned to help him keep a "dirty dozen" of at-risk teens in school. But it turns out the kids love Farrah. And to Michael's horror, he does too. Now what's he going to do?

A wild fashion show plan, turf wars between the teens, a party girl forced to sober up and a strong-willed virgin forced to loosen up; what could possibly go wrong? A steamy, laugh-out-loud romantic adventure from the author of ELLYN & THE WOULD-BE GIGOLO.

About Mindy Klasky: USA Today bestselling author Mindy Klasky learned to read when her parents shoved a book in her hands and told her she could travel anywhere through stories. As a writer, Mindy has traveled through various genres, including cozy paranormal, hot contemporary romance, and traditional fantasy. In her spare time, Mindy knits, quilts, and tries to tame her to-be-read shelf.

About Meg Napier: Meg Napier knows that love can spring to life and thrive even in the most trying circumstances. She shows you how it happens in her romantic suspense and dual-time-line love stories, all of which begin with the word second. A long-time resident of Arlington, she is overjoyed to live near a bookstore that celebrates the only things in life besides love that really matter: books and chocolate!

About Pru Warren: Pru Warren (who is writing this in the third person as if simply too modest to toot her own horn) bores easily and thus has been a daydreamer since roughly the Bronze Age. She is addicted to writing because in a novel, you can make things come out the RIGHT way. Life and karma really ought to take note; there are BETTER SOLUTIONS to these pesky daily annoyances! Beside her in-the-laptop God Complex, Pru laughs often and easily, loathes cooking, and plays way too much solitaire. She's plotting world domination even as you read this, as long as she doesn't have to wake up too early to accomplish it.