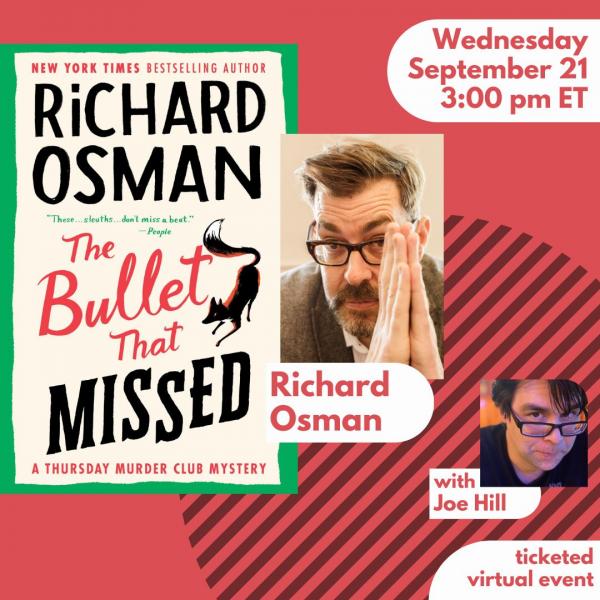 Join us as we team up with fellow indie bookstores Murder By The Book and The King's English to host Richard Osman in conversation with author Joe Hill about Richard's new book in the highly popular Thursday Murder Club series: The Bullet That Missed!

Pre-orders are available for signed copies of The Bullet That Missed!

Joe Hill is the #1 New York Times bestselling author of the novels The Fireman, NOS4A2, Horns, and Heart-Shaped Box; Strange Weather, a collection of novellas; and the acclaimed story collections Full Throttle and 20th Century Ghosts. He is also the Eisner Award–winning writer of a seven-volume comic book series, Locke & Key. Much of his work has been adapted for film and TV, including NOS4A2 (AMC), Locke & Key (Netflix), and In the Tall Grass (Netflix).

This is a ticketed event, however it couldn't be easier to get a ticket - just purchase a copy of The Bullet That Missed from One More Page! We'll email you the Crowdcast link to participate on September 21st!

If you've already pre-ordered a copy of The Bullet That Missed from us, no worries, you will also be emailed a Crowdcast link so that you can view and participate in the event.

The Bullet That Missed: A Thursday Murder Club Mystery (Hardcover)