Join us live on the OMP Facebook page for this virtual event!

ALL proceeds go to One More Page, Avant Bard, and WPFW. Support the bookstore! Support the arts! Support public radio!

Former WAMU host and news anchor Derek McGinty and local author John Wasowicz will participate in a virtual “town hall” at One More Page on Wednesday, April 1, to discuss their collaborative effort to record the audiobook version of JONES POINT, a legal mystery.

Their talk will be moderated by WPFW’s Ciera Shine and presented LIVE on Ms. Shine’s weekly show, “Sankofa,” from 7-8 pm.  Actors from Avant Bard will join the conversation to discuss the role of professional actors as audiobook narrators.

You can join online and listen on-air. If you buy a book, we’ll mail it to you or you can arrange pick-up at the curb. Book buyers will receive a free download of the audiobook version of JONES POINT, courtesy of Libro.fm.

— ALL proceeds go to the store, the theater, and the radio station — 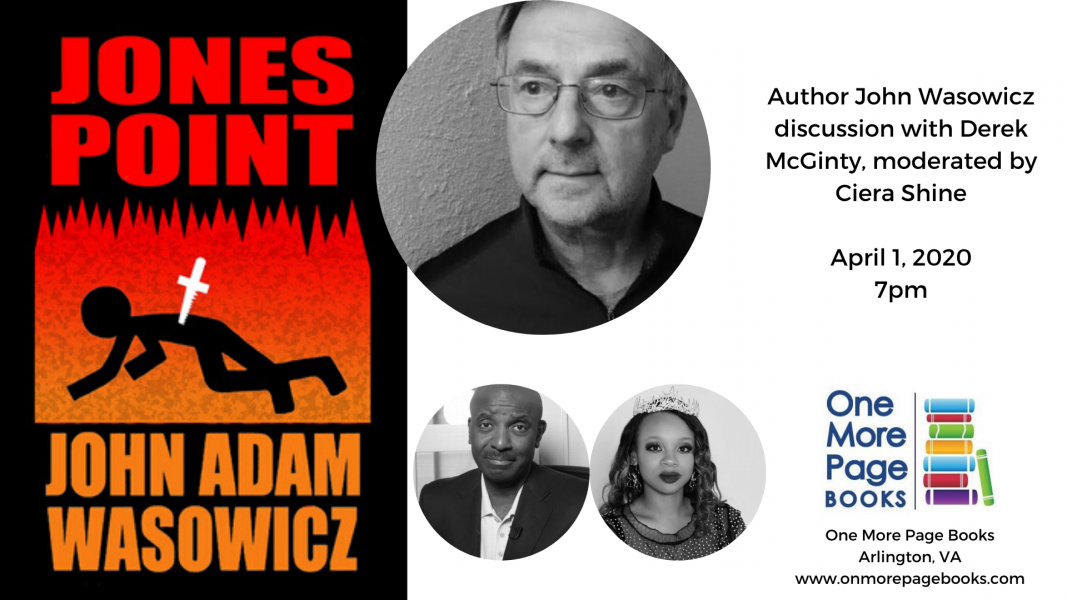 In JONES POINT, two grisly murders and a deadly firefight on the Woodrow Wilson bridge put Mo Katz, U.S. Attorney EDVA, on a collision course with a rogue intelligence operative and a sinister person of interest.

Author and attorney John Wasowicz began his 30-year legal career as a prosecutor in Arlington County. He has written two Mo Katz mysteries, including “Jones Point” and “Daingerfield Island” (2017), which was narrated by Bill Newman.

John Adam Wasowicz has practiced law for over 30 years in the public and private sectors. He is the author of the Mo Katz mystery series, including “Daingerfield Island” (2017) and the soon-to-be-released “Jones Point.” Both books are set in Alexandria, VA. Derek McGinty is narrating JONES POINT, available on Libro.fm.