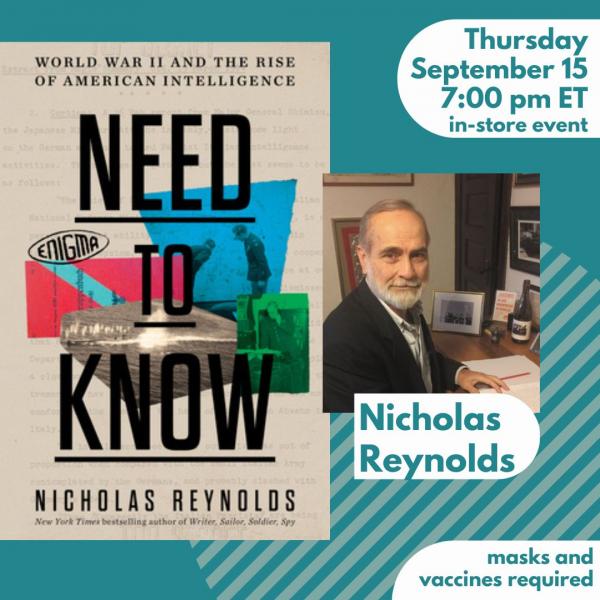 Historian and former CIA officer Nicholas Reynolds, the New York Times bestselling author of Writer, Sailor, Soldier, Spy, will be in the store sharing his latest work: NEED TO KNOW, the definitive history of American intelligence during World War II.

Our current event capacity limit is 40 people, so please register to be sure you get in. Proof of COVID vaccination will be required at the door. (See the Eventbrite registration page for more about our COVID precautions.) Masks are required to be worn throughout the event.

The entire vast modern American intelligence system—the amalgam of three-letter spy services of many stripes—can be traced back to the dire straits that Britain faced at the end of June 1940. Before World War II, the US had no organization to recruit spies and steal secrets or launch secret campaigns against enemies overseas. It was only through Winston Churchill’s determination to mobilize the US to help in their fight against Hitler that the first American spy service was born, one that was built by scratch in the background of WWII.

In NEED TO KNOW, Reynolds explores the birth, infancy, and adolescence of modern American intelligence. In this first definitive account, Reynolds combines little-known history and gripping spy stories to analyze the American codebreakers’ and spies’ origins and contributions to Allied victory, revealing how they laid the foundation for the Cold War—and all other conflicts to come.

Nicholas Reynolds has worked in the fields of modern military history and intelligence off and on for forty years, with some unusual detours. Freshly minted PhD from Oxford University in hand, he joined the United States Marine Corps in the 1970s, serving as an infantry officer and then as a historian. As a colonel in the reserves, he eventually became officer in charge of field history, deploying historians around the world to capture history as it was being made. When not on duty with the USMC, he served as a CIA officer at home and abroad, immersing himself in the very human business of espionage. Most recently, he was the historian for the CIA Museum, responsible for developing its strategic plan and helping to turn remarkable artifacts into compelling stories. He currently teaches as an adjunct professor for Johns Hopkins University and, with his wife, Becky, cares for rescue pugs.