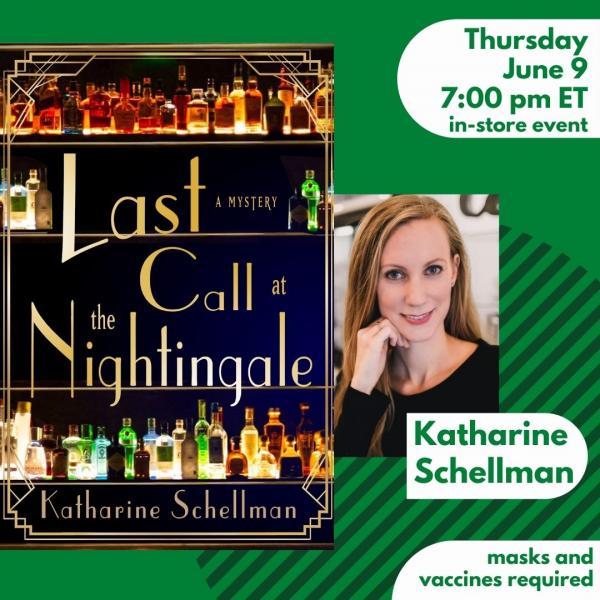 Katharine Schellman joins us at One More Page in June to celebrate her new novel, LAST CALL AT THE NIGHTINGALE. Join us at the store!

As of March 1, the new capacity limit is 40 people, so please register to be sure you get in. Proof of COVID vaccination will be required at the door. (See the Eventbrite registration page for more about our COVID precautions.) If Covid protocols change, we will update them here.

Katharine Schellman is a former actor, one-time political consultant, and current writer. Her debut novel, The Body in the Garden, was a Suspense Magazine Best Book of 2020 and led to her being named one of BookPage’s 16 Women to Watch. A graduate of the College of William & Mary, Katharine currently lives and writes in the mountains of Virginia in the company of her husband, children, and the many houseplants she keeps accidentally murdering.

First in a captivating Jazz age mystery series from author Katharine Schellman, Last Call at the Nightingale beckons readers into a darkly glamorous speakeasy where music, liquor, and secrets flow.

New York, 1924. Vivian Kelly's days are filled with drudgery, from the tenement lodging she shares with her sister to the dress shop where she sews for hours every day.

But at night, she escapes to The Nightingale, an underground dance hall where illegal liquor flows and the band plays the Charleston with reckless excitement. With a bartender willing to slip her a free glass of champagne and friends who know the owner, Vivian can lose herself in the music. No one asks where she came from or how much money she has. No one bats an eye if she flirts with men or women as long as she can keep up on the dance floor. At The Nightingale, Vivian forgets the dangers of Prohibition-era New York and finds a place that feels like home.

But then she discovers a body behind the club, and those dangers come knocking.

Caught in a police raid at the Nightingale, Vivian discovers that the dead man wasn't the nameless bootlegger he first appeared. With too many people assuming she knows more about the crime than she does, Vivian finds herself caught between the dangers of the New York's underground and the world of the city's wealthy and careless, where money can hide any sin and the lives of the poor are considered disposable...including Vivian's own.

Last Call at the Nightingale - SIGNED - by Katharine Schellman

Silence in the Library: A Lily Adler Mystery (LILY ADLER MYSTERY, A #2) (Hardcover)

The Body in the Garden: A Lily Adler Mystery (LILLY ADLER MYSTERY, A #1) (Paperback)