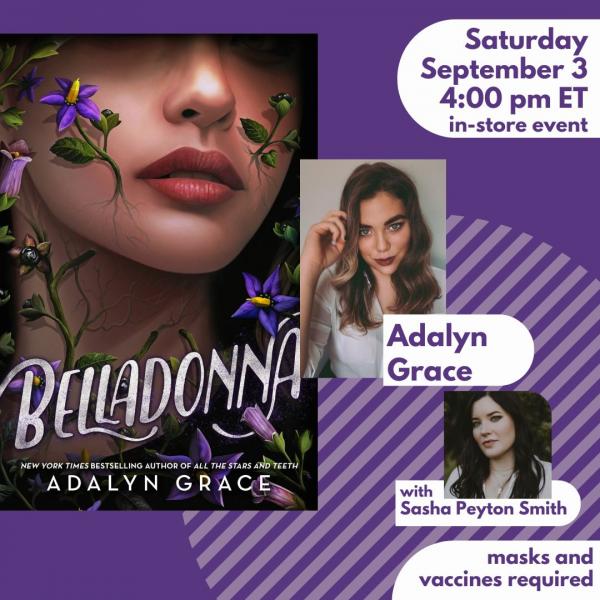 We look forward to welcoming New York Times bestselling author Adalyn Grace to the store to celebrate the release of her new highly romantic, Gothic-infused world of wealth, desire, and betrayal in BELLADONNA. Join us on the first Saturday in September for her conversation with author Sasha Peyton Smith!

Our current event capacity limit is 40 people, so please register to be sure you get in. Proof of COVID vaccination will be required at the door. (See the Eventbrite registration page for more about our COVID precautions.) If Covid protocols change, we will update them here.

Orphaned as a baby, nineteen-year-old Signa has been raised by a string of guardians, each more interested in her wealth than her well-being—and each has met an untimely end. Her remaining relatives are the elusive Hawthornes, an eccentric family living at Thorn Grove, an estate both glittering and gloomy. Its patriarch mourns his late wife through wild parties, while his son grapples for control of the family’s waning reputation and his daughter suffers from a mysterious illness. But when their mother’s restless spirit appears claiming she was poisoned, Signa realizes that the family she depends on could be in grave danger and enlists the help of a surly stable boy to hunt down the killer.

However, Signa’s best chance of uncovering the murderer is an alliance with Death himself, a fascinating, dangerous shadow who has never been far from her side. Though he’s made her life a living hell, Death shows Signa that their growing connection may be more powerful—and more irresistible—than she ever dared imagine.

Adalyn Grace is the New York Times bestselling author of All the Stars and Teeth, which was named "2020's biggest YA fantasy" by Entertainment Weekly, and the sequel, All the Tides of Fate. Prior to becoming an author, Adalyn spent four years working in live theatre, acted as the managing editor of a nonprofit newspaper, and studied storytelling as an intern on Nickelodeon Animation's popular series The Legend of Korra. Local to San Diego, Adalyn spends her nonwriting days watching too much anime and playing video games with her two dorky dogs.

Sasha Peyton Smith grew up in the mountains of Utah surrounded by siblings, books, and one very old cat. She attended the University of Utah and the George Washington University where she studied biology and public health. She is not a witch, though she does own a lot of crystals and always knows what phase the moon is in. She currently lives in Washington, DC.

All the Stars and Teeth (PB) - SIGNED by Adalyn Grace

All the Stars and Teeth (HC) - SIGNED - by Adalyn Grace

All the Tides of Fate (PB) - SIGNED - by Adalyn Grace

All the Tides of Fate (HC) - SIGNED - by Adalyn Grace