The Fight to Vote (Paperback) 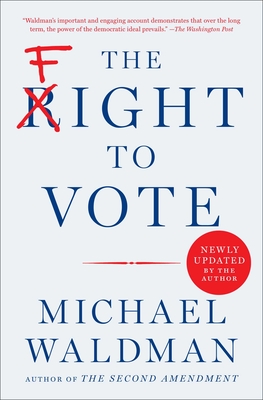 The Fight to Vote (Paperback)


Available from Our Distributor (Not in Store)
Praised by the late John Lewis, this is the seminal book about the long and ongoing struggle to win voting rights for all citizens by the president of The Brennan Center, the leading organization on voter rights and election security, now newly revised to describe today’s intense fights over voting.

As Rep. Lewis said, and recent events in state legislatures across the country demonstrate, the struggle for the right to vote is not over. In this “important and powerful” (Linda Greenhouse, former New York Times Supreme Court correspondent) book Michael Waldman describes the long struggle to extend the right to vote to all Americans. From the writing of the Constitution, and at every step along the way, as disenfranchised Americans sought this right, others have fought to stop them. Waldman traces this history from the Founders’ debates to today’s many restrictions: gerrymandering; voter ID laws; the flood of dark money released by conservative organizations; and the concerted effort in many state legislatures after the 2020 election to enact new limitations on voting.

Despite the pandemic, the 2020 election had the highest turnout since 1900. In this updated edition, Waldman describes the nationwide effort that made this possible. He offers new insights into how Donald Trump’s false claims of fraud—“the Big Lie”—led to the January 6 insurrection and the fights over voting laws that followed one of the most dramatic chapters in the story of American democracy.

As Waldman shows, this fight, sometimes vicious, has always been at the center of American politics because it determines the outcome of the struggle for power. The Fight to Vote is “an engaging, concise history…offering many useful reforms that advocates on both sides of the aisle should consider” (The Wall Street Journal).
Michael Waldman is president of the Brennan Center for Justice at NYU School of Law, a nonpartisan law and policy institute that works to revitalize the nation’s systems of democracy and justice. He was director of speechwriting for President Bill Clinton from 1995 to 1999 and is the author of The Second Amendment: A Biography and The Fight to Vote. Waldman was a member of the Presidential Commission on the Supreme Court. A graduate of Columbia College and NYU School of Law, he comments widely in the media on law and policy.
"Through this book, Michael Waldman delivers a message every American needs to hear. The struggle for the right to vote is not over. It is still being waged even today. We must use it or we can lose it."
— Rep. John Lewis

"Michael Waldman's masterly history reminds us that ‘We the People’ can and must restore our experiment in Constitutional freedom."
— Taylor Branch, author of America in the King Years

“Waldman’s important and engaging account demonstrates that over the long term, the power of the democratic ideal prevails — as long as the people so demand.”
— The Washington Post

“An engaging, concise history of American voting practices, and despite a heavily partisan treatment of today’s “voting wars,” it offers many useful reforms that advocates on both sides of the aisle should consider.”
— The Wall Street Journal

“The Fight to Vote is an important and powerful reminder that we forget American history at our peril: that democracy was hard-won and that with the right to vote once again under attack, it's ours to lose.”
— Linda Greenhouse, Knight Distinguished Journalist in Residence and Joseph Goldstein Lecturer in Law at Yale Law School

“As Waldman makes clear in this important book, the fight to vote has been at the heart of U.S. history, as have the countless debates over how to expand democracy even as ‘some fought to gain a voice in their government’ while ‘others fought just as hard to silence them.’”
— Booklist (starred review)