The Answer Is . . .: Reflections on My Life (Paperback) 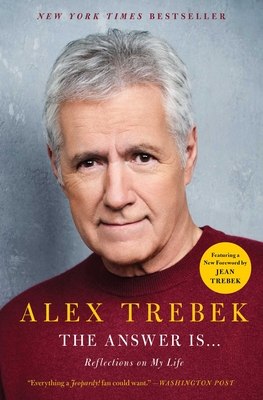 The Answer Is . . .: Reflections on My Life (Paperback)


On Our Shelves Now - Please Allow up to 24-48 hours for Curbside Pickup
Longtime Jeopardy! host and television icon Alex Trebek reflects on his life and career.

When he debuted as the host of Jeopardy! in 1984, Alex Trebek became something like a family member to millions of television viewers, bringing entertainment and education into their homes five nights a week. In 2019, he made the stunning announcement that he had been diagnosed with Stage IV pancreatic cancer. What followed was an incredible outpouring of love and kindness. Social media was flooded with messages of support, and the Jeopardy! studio received boxes of cards and letters offering guidance, encouragement, and prayers.

For more than three decades, Trebek had resisted countless appeals to write a book about his life. Yet he was moved so much by all the goodwill, he felt compelled to finally share his story. “I want people to know a little more about the person they have been cheering on for the past year,” he writes.

The book combines illuminating personal anecdotes with Trebek’s thoughts on a range of topics, including marriage, parenthood, education, success, spirituality, and philanthropy. Trebek also addresses the questions asked most often by Jeopardy! fans, such as what prompted him to shave his signature mustache, his insights on legendary players like Ken Jennings and James Holzhauer, and his opinion of Will Ferrell’s Saturday Night Live impersonation. The book uses a novel structure inspired by Jeopardy! and features dozens of never-before-seen photos that candidly capture Trebek over the years.

This wise, charming, and inspiring book is further evidence of why Trebek has long been considered one of the most beloved and respected figures in entertainment.
Alex Trebek hosted the syndicated quiz show Jeopardy! for thirty-six seasons, earning him seven Daytime Emmy Awards—including a Lifetime Achievement Award—and the Guinness World Record for most episodes of a game show hosted by the same presenter. Prior to Jeopardy!, he hosted numerous quiz shows and game shows, including The Wizard of Odds and High Rollers. He began his career with the Canadian Broadcasting Corporation, working there for more than a decade. He graduated from the University of Ottawa and held honorary doctorates from the University of Ottawa and Fordham University. He worked with the humanitarian organization World Vision and contributed to various other philanthropic organizations, including the USO, UNCF, National Geographic Society, and the Hope of the Valley Rescue Mission. He died in Los Angeles on November 8, 2020, at the age of eighty.