Off the Back of a Truck: Unofficial Contraband for the Sopranos Fan (Hardcover) 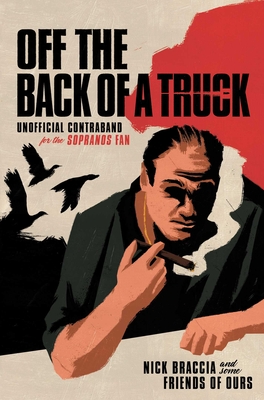 Off the Back of a Truck: Unofficial Contraband for the Sopranos Fan (Hardcover)


Available from Our Distributor (Not in Store)
Unleash your inner Soprano and relive all your favorite moments with this companion guide to the award-winning television series The Sopranos.

We all know and love The Sopranos, one of the most important television dramas to ever hit the small screen, having run for six seasons on HBO. The story of the Italian-American mobster Tony Soprano balancing his family life with his role as the leader of a criminal organization pioneered decades of genre-bending “peak TV.”

Now, Off the Back of a Truck takes you one step further into the world of Tony Soprano and his families, offering an Italian potluck of fresh and fun takes that any true fan can get lost in for hours.

Off the Back of a Truck includes:
-New looks at everyone’s favorite episodes, scenes, and characters
-All 92 deaths analyzed, evaluated, and ranked
-An investigation of true crimes behind the families’ schemes
-An exploration of movies and shows that inspired The Sopranos
-Reflections on the use of music, food, and fashion from writers who are also huge fans
-A provocative conversation about what happens in the controversial ending

This book takes you on a journey through the six seasons you have watched time and time again—but it's organized so you can dip in at any time, at any place. Roam around as though you’re in Tony’s backyard for a BBQ...
Nick Braccia is a Cannes Lions– and Clio–winning writer, director, and producer. In 2018, he cocreated and coexecutive produced the horror podcast Video Palace for AMC Network’s streaming service Shudder. While working at the marketing agency Campfire, he helped to develop immersive, narrative experiences for TV shows like Outcast, Sense8, Watchmen, The Man in the High Castle, Westworld, and The Purge. Braccia is a member of the Producers Guild of America and lives in Manhattan with his partner, Amanda, and daughter, Evie Blue.
“According to radio and TV producer Braccia, this grab bag of ephemera about HBO’s Sopranos “isn’t a guide, it’s a party.” That description is largely correct, given that the book does not march from season one to six, but jumps all over in its eagerness to study aspects of the show’s 86 episodes. He discusses the socioeconomics of the series (referring to the characters as “the Italian-American Mafia’s B-team at the turn of the millennium”), the history of director and producer David Chase’s career (he wrote for The Rockford Files), and the show’s influences (Chase drew from David Lynch to write the show’s dream episodes). The writing of Braccia and a couple contributors—chef Eddie McNamara’s passionate defense of Italian American “red sauce” cooking is a gem (“Food is my favorite character on The Sopranos,” he writes)—are vibrant and astute enough to avoid full fanboy gushing. . . . At its best, this book slices and dices Sopranos lore with humor, insight, and unabashed devotion.”—Publishers Weekly

“I'm wrapping up my Sopranos rewatch. Sadly, all good things must come to an end. Luckily, when it comes to The Sopranos, there's plenty of ways to extend my passion. I'm immersed in Nick Braccia's Off the Back of a Truck: Unofficial Contraband for the Sopranos Fan , which offers all the listicles, hard-hitting essays, and fun trivia any devotee could desire, and more.”—Liz French, Library Journal

"More delicious than a slice of gabagool and ten times funnier than a screening of Cleaver, Off the Back of a Truck is an absolute must-read for any Sopranos super-fan. Insightful, witty, and astoundingly detailed, Nick Braccia's guide to the life and maybe-death of Tony Soprano is the next best thing to a trip to the Bada Bing."—Barry Hertz, Film Editor at The Globe and Mail

“A dynamic assemblage of dead-on insights and observations about The Sopranos…. For fans, this is better than a bowl of Artie Bucco’s ziti. In the introduction, Braccia gives readers permission to bounce around, which is refreshing…. It would be easy to label this collection as fanboy material, but the writing—Braccia’s [contributor] “friends” include professors, psychiatrists, film and TV writers, and filmmakers—is incisive in its dissections of the show’s elements. Wrapping up with a morgue’s worth of the story’s victims and the contributors’ favorite episodes, the book organically ends with a group conversation about the show’s most infamous episode, “Made in America.” Cut to black. An entertaining and engaging virtual watch party for a show that changed TV forever.”—Kirkus