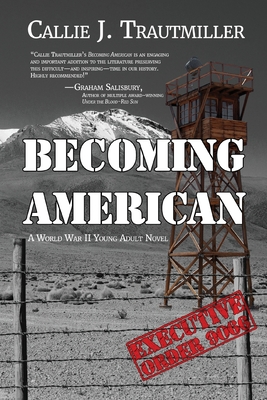 "Callie Trautmiller's Becoming American is an engaging and important addition to the literature preserving this difficult--and inspiring--time in our history. Highly recommended "

--Graham Salisbury, Author of multiple award-winning Under the Blood-Red Sun

A family torn apart by war.

It's 1941 and America is in the heat of war. When Pearl Harbor is bombed during World War II, suspicions run high and having the wrong color of skin makes you the enemy. Especially if it is Japanese skin.

Allu Noguchi is a young Japanese American girl who finds her family the target of Executive Order 9066. When her father is taken away on suspicions of aiding the enemy, Allu is sent to live in the harsh conditions of Camp Manzanar with nothing more than a seed-bag of belongings.

With her heritage under scrutiny, she strives to maintain hope and finds an unlikely friendship that will urge her to question her own pre-judgements.

With their father gone, Allu's sibling, Robbie, takes over as head of household, but struggles with a hunger for independence as he watches his friends go off to fight in World War II. When the 100th Battalion calls for reinforcements among camp internees for the military, he must choose between the family he is responsible for and the sense of duty which fills his heart. But what will Allu do without Robbie to protect her?