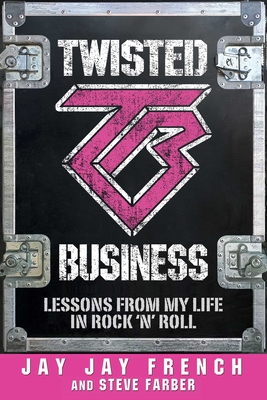 In addition to founding Twisted Sister, a world-famous heavy metal band that has sold more than 20 million records worldwide, Jay Jay French is one of the top entrepreneurs in entertainment. After taking over as manager in the ‘70s, French developed Twisted Sister into the most heavily licensed heavy metal band in history, leading the group to perform more than 9,000 shows in forty countries.

Part business book, part memoir, Twisted Business is an unexpected, inspiring, whirlwind story of transformation and redemption. Twisted Business follows French’s adventure-filled life—from growing up in New York City in the sixties, to working as a drug dealer and struggling as an addict before quitting cold-turkey, and finally, to creating and cultivating Twisted Sister and turning it into one of the most successful brands in the world.

Together with his mentor, Steve Farber, a best-selling author and one of the world’s top leadership and management experts, French offers unique, hard-earned tips and advice from his nearly 50 years as a musician, music business manager, and entrepreneur. French shows how, through tenacity, grit, and dedication, anyone can create their own brand, grow a successful business, re-invent themselves, or simply find success in what they love to do. Entertaining, provocative, funny, and informative, this book is the trip of a lifetime and a treasured guide for entrepreneurs, business people, and music fans alike.
Jay Jay French founded Twisted Sister, the internationally renowned heavy metal band, nearly fifty years ago. Since then, he has catapulted his career to become one of the most successful managers, producers, and entrepreneurs in the music business. French has amassed thirty-nine gold and platinum albums as a musician, manager, producer, and executive producer, and has performed over 9,000 shows in forty countries, selling 20 million records around the world. A charter member of the Long Island Music Hall of Fame and the costar of the critically acclaimed documentary, We Are Twisted F*cking Sister, he is considered a leading expert on vintage guitars and high-end music equipment.

French is a rock star, but he also shines as a business leader who developed Twisted Sister into a global brand with multiple revenue streams and built it into the most licensed heavy metal band in history. He is a contributing editor and columnist for Copper and Goldmine Magazine, and writes a business column for Inc.com called “The French Connection.” With his extensive business acumen, French often works as a keynote motivational speaker, delivering presentations to global Fortune 500 companies and nonprofits. Jay Jay’s insight and tried-and-true-tips about resiliency, reinvention, tenacity, turning roadblocks into pathways, authentic leadership, and innovation are now available to everyone in his “bizoir,” Twisted Business.

Steve Farber is a Wall Street Journal best-selling author and the founder and CEO of The Extreme Leadership Institute. Ranked on Inc.’s listing of the Top 50 Leadership and Management Experts in the world and #1 on Huffington Post’s 12 Business Speakers to See, Farber is considered to be one of the world’s top motivational speakers and leadership experts. His third book, Greater Than Yourself: The Ultimate Lesson of True Leadership, was a Wall Street Journal® and USA Today® bestseller. His second book, The Radical Edge: Stoke Your Business, Amp Your Life, and Change the World, was hailed as “a playbook for harnessing the power of the human spirit.” And his first book, The Radical Leap: A Personal Lesson in Extreme Leadership, received Fast Company magazine’s Readers’ Choice Award and was named one of the 100 Best Business Books of All Time. Farber’s most recent book, Love Is Just Damn Good Business, has been listed by Book Authority as one of the top business strategy books of 2020.

Farber is a member of the exclusive Transformational Leadership Council and sits on the steering committee of the Community Alliance for Youth Success, co-founded by Bobbi DePorter and Stedman Graham.
These days, French focuses on business and writing, having retired from music following Twisted Sister’s final show in 2016. But he still has plenty of rock and roll mojo, and he brings that energy to every page of this very entertaining — and very educational (in a good way) — book.