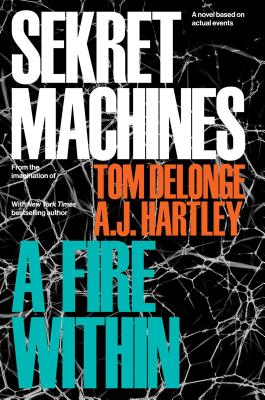 This is book number 2 in the Sekret Machines series.

Tom DeLonge—award-winning creator and accomplished researcher, who made history by releasing the first official military footage of a UFO that has been through the US government declassification review process—and New York Times bestselling author A.J. Hartley continue their thrilling Sekret Machines saga of archeological adventure, government conspiracy, historical mystery, and unimaginable technology with Sekret Machines Book 2: A Fire Within.

They have witnessed what is beyond the bounds of possibility. Lights sailing across Nevada’s desert night sky in fluid and rapid motions that are impossible for even the most technologically advanced aircraft. They have encountered those responsible for the unexplained.  Men in black suits, white lab coats, and military uniforms who do not want their secrets exposed.

Brought together by fate—or phenomena—heiress Jennifer Quinn, journalist Timika Mars, pilot Alan Young, and ex-Marine Barry Regis are bonded by the incidents they’ve witnessed, hunted by agents of a wealthy corporate cabal desperate for unimaginable power, and possessed of extraordinary abilities they do not understand, much less control.

Now, they’re on a mission of their own. As Alan and Barry test the limits of their strange gifts inside the military complex known as Dreamland, Jennifer and Timika begin a quest to locate an ancient tablet that may hold the answers to humanity’s greatest question.

Are we alone in the universe?

Based on the accounts of credible UAP observers drawn from expert sources within the scientific, military and intelligence communities, Sekret Machines: A Fire Within is the second fiction book within a multimedia project that has become part of the most ambitious investigation of the phenomenon in history.
A.J. Hartley is the New York Times and USA Today bestselling author of books in a variety of genres and was born and raised in Lancashire in Northern England,. A.J.’s stories are driven by mystery and danger but also reflect his abiding interest in archaeology, history, and foreign travel. As an English major at Manchester University he took extra classes in Egyptology and got a job working on a Bronze Age site just outside Jerusalem. Since then, life has taken him to many places around the world, and though he always leaned more towards the literary than to the strictly historical, his fascination with the past continues unabated. He has an M.A. and Ph.D. in English literature from Boston University, and he is the Russell Robinson Professor of Shakespeare Studies at the University of North Carolina, Charlotte, and works as a scholar, screenwriter, dramaturg and theatre director.