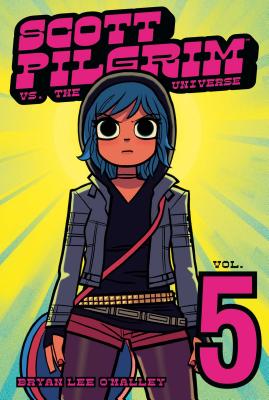 This is book number 5 in the Scott Pilgrim series.

Scott Pilgrim just turned 24, and things couldn't possibly be better! This means things are about to get infinitely worse! Suddenly, TWO of Ramona's evil ex-boyfriends are in town, and they're playing dirty. His band is in turmoil, and his own exes aren't making things any easier. And what's up with Ramona, anyway? She's been acting kinda weird ever since they moved in together! Scott's precious little life is coming back around to bite him in the butt, and it may not be pretty!
Bryan Lee O'Malley is a Canadian cartoonist best known for the bestselling, award-winning Oni Press series "Scott Pilgrim" (2004-2010). "Scott Pilgrim" was adapted into a critically-acclaimed major motion picture (from Universal) and video game (from Ubisoft) in 2010. O'Malley lives in Los Angeles, where he continues to make comics.