The Greatest Show on Earth: The Inside Story of the Legendary 1970 World Cup (Hardcover) 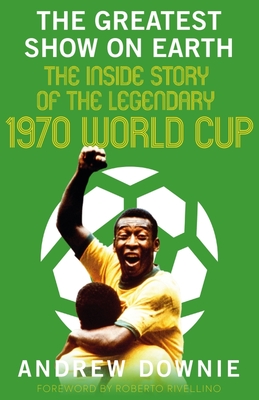 The Greatest Show on Earth: The Inside Story of the Legendary 1970 World Cup (Hardcover)

The 1970 World Cup is widely regarded as the greatest ever staged, with more goals per game than any World Cup since. But more than just the proliferation of goals was the quality of the overall football, as some of the finest teams ever to represent the likes of West Germany, Peru, Italy and England came together for a tilt at the world title. But at the heart of the tournament were Brazil; captained by Carlos Alberto and featuring legends like Pel , G rson, Jairzinho, Rivellino and Tost o, the 1970 Sele o are often cited as the greatest-ever World Cup team.

Using brand new interviews alongside painstaking archival research, Andrew Downie charts each stage of the tournament, from the preparations to the final, telling a host of remarkable stories in the players' own words. The result is an immediate, insightful and compelling narrative that paints a unique portrait of an extraordinary few weeks when football hit peaks it has seldom reached since. This is Mexico 1970. Welcome to the Greatest Show on Earth.