Decoding the Movies: Hollywood in the 1930s (Exeter Studies in Film History) (Hardcover) 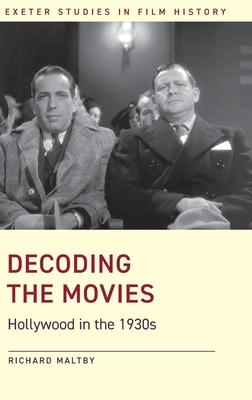 Decoding the Movies: Hollywood in the 1930s (Exeter Studies in Film History) (Hardcover)

This book "decodes" 1930s Hollywood movies and explains why they looked and behaved in the way they did. Organized through a series of related case studies, the book exposes Classical Hollywood movies to a detailed analysis of their historical, industrial and cultural contexts. In the process it utilizes industry data, aesthetic analysis and the insights of New Cinema History to explain why and how these movies assumed their familiar forms.

The book represents the summation of Richard Maltby's four decades of scholarship in the field of Hollywood cinema. The essays presented here share an assumption that has increasingly informed the author's critical method over the years: that any historical understanding of the films of this period requires a deep contextualization in the social circumstances surrounding both their production and consumption. In this way, the book introduces an innovative, overarching research methodology that synthesizes branches of research that are typically employed in isolation, including production, distribution, reception, film aesthetics, and cultural and historical context.

Of the book's nine chapters, three are presented here for the first time, and four have been substantially revised and extended from their original publication.

Richard Maltby is Matthew Flinders Distinguished Professor of Screen Studies at Flinders University, South Australia. He moved to Flinders from the UK, where he established the Bill Douglas Centre for the History of Cinema and Popular Culture at the University of Exeter, before becoming Research Professor in Film Studies at Sheffield Hallam University. His publications include Explorations in New Cinema History: Approaches and Case Studies (Wiley-Blackwell, 2011) and Cinema, Audiences and Modernity: New Perspectives on European Cinema History (Routledge, 2011), Hollywood Cinema (Wiley-Blackwell), Dreams for Sale: Popular Culture in the Twentieth Century (Harrap). 'Film Europe' and 'Film America': Cinema, Commerce and Cultural Exchange, 1925-1939, co-edited with Andrew Higson (UEP 1999), was winner of the prestigious Prix Jean Mitry for cinema history in 2000. He is a Series Editor of Exeter Studies in Film History.