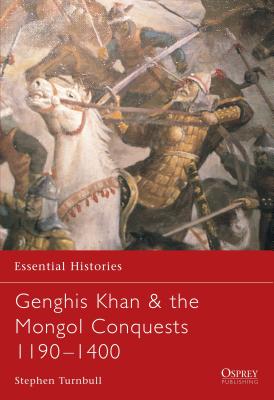 This is book number 57 in the Essential Histories series.

The history of the Mongol conquests is a catalogue of superlatives. No army in the world has ever conquered so much territory, and few armies have provoked such terror as the Mongol hordes. So vast was the extent of the Mongol Empire that the samurai of Japan and the Teutonic Knights of Prussia had each fought the same enemy while being unaware of each other's existence. This book provides a concise yet thorough account of the Mongol conquests, including the rise of Genghis Khan and the unification of the tribes with up to date information on campaign logistics, tactics and horse breeding.
Stephen Turnbull is widely recognised as the world's leading English language authority on the samurai of Japan. He took his first degree at Cambridge and has two MAs (in Theology and Military History) and a PhD from Leeds University. He is now retired and pursues an active literary career, having now published 85 books. His expertise has helped with numerous projects including films, television and the award-winning strategy game Shogun Total War.