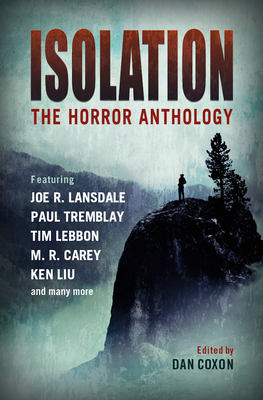 
Available from Our Distributor (Not in Store)
A chilling horror anthology of 20 stories about the terrifying fears of isolation, from the modern masters of horror.

Lost in the wilderness, or alone in the dark, isolation remains one of our deepest held fears. This horror anthology from Shirley Jackson and British Fantasy Award finalist Dan Coxon calls on leading horror writers to confront the dark moments, the challenges that we must face alone: survivors in a world gone silent; the outcast shunned by society; the quiet voice trapped in the crowd; the lonely and forgotten, screaming into the abyss.

Experience the chilling terrors of Isolation. Featuring stories by:

"There is so much with This Dreaming Isle to marvel at, from the inception of the remarkable concept from editor Dan Coxon, to the beautifully haunting image that wraps itself around the book… it’s a celebration of fabulous writing, it’s an ingenious collection and concept, all of the writers turn in stunning works of eerie, creepy goodness, and lastly it’s a celebration of the rich history we have here on our little island of storytellers, raconteurs, myths and folklore."
–STORGY

"Whether you read these tales in the city, countryside, or by the coast, you will be left a little less comfortable than you were before. Like the Pan Book of Horror Stories, I’m certain this finely edited paperback will become a cult classic."
–Sabotage Reviews

"I challenge anyone not to find at least one tale in This Dreaming Isle that speaks to them, that touches their heart or sets it racing. This is a gorgeous book. It is wreathed in terror and enchantment and it presents the supernatural as it should be—wild, inexplicable, beautiful, but never, ever safe."
–Fantasy-Faction

"a very well put together anthology, which I think Dan Coxon has done an excellent job with."
–British Fantasy Society