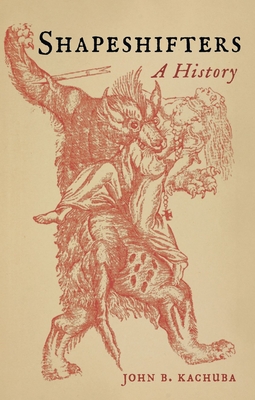 There is something about a shapeshifter—a person who can transform into an animal—that captures our imagination; that causes us to want to howl at the moon, or flit through the night like a bat. Werewolves, vampires, demons, and other weird creatures appeal to our animal nature, our “dark side,” our desire to break free of the bonds of society and proper behavior. Real or imaginary, shapeshifters lurk deep in our psyches and remain formidable cultural icons.

The myths, magic, and meaning surrounding shapeshifters are brought vividly to life in John B. Kachuba’s compelling and original cultural history. Rituals in early cultures worldwide seemingly allowed shamans, sorcerers, witches, and wizards to transform at will into animals and back again. Today, there are millions of people who believe that shapeshifters walk among us and may even be world leaders. Featuring a fantastic and ghoulish array of examples from history, literature, film, TV, and computer games, Shapeshifters explores our secret desire to become something other than human.

John B. Kachuba is an award-winning author and creative writing instructor at Ohio University. He has investigated over one-hundred haunted locations around the world and his books include Ghosthunters and Dark Entry.

"Kachuba has complied an extensive survey of all sorts of shapeshifting myths, legends, folktales, and fairy tales from the ages. He covers everything from the gods and goddesses of the ancient world, to the faerie folk of Europe, to the classics such as the werewolf and the vampire. He also talks quite a bit about how preoccupation with the power to transform oneself ties in deeply with cultural beliefs about race, gender, sex, and identity, and how that has played out in the evolution of these shapeshifters not only throughout oral history, but in their portrayals in popular media. If you enjoy reading nonfiction works about the origins our monsters and mythical beings as much as I do, then this is the book for you."
— Cemetery Dance

"Delivers a series of interesting . . . accounts of transformations of human to animal; something that appears . . . to be a widespread myth. Kachuba muses that this theme—beginning with Lyacon, the king of Arcadia whom Zeus changed into a wolf—may fulfill a universal desire to be what we are not. . . . Were you to want a primer on were-anything, this is a fine start."
— Spectator

"Shapeshifters are those 'who can change from human form to that of an animal,' Kachuba tells us. Yet his absorbing and comprehensive conspectus of mutation also takes in human beings who can impersonate other human beings; Uther Pendragon does this in order to impregnate his future queen at Tintagel. Shapeshifting is fascinating and troubling: it asks questions about how we can tell who is who. From the inside, shapeshifting is about the struggle to find a true identity, but from the outside this shifting looks shifty."
— Times Literary Supplement

"[A] wide-ranging study . . . of our long-established fascination with shapeshifting in all its guises. It is ubiquitous in literature and folklore, from the countless metamorphoses in Greek myth down to the apprentice wizards of Hogwarts. Transformation is the lifeblood of narrative. . . . Kachuba refreshes the meager store of case studies from the time of the European witch craze with comparable modern accounts."
— Literary Review

"Shapeshifters: A History is an extremely well researched and thorough look at the myths. legends, and stories of shapeshifters across time and cultures...It is academic AND fun to read."
— Readers' Advisory Guide to Horror Blog

"The book is a look at the cultural forces which generate tales of shapeshifters as much as it is a history, if not more so. The writing is engaging and the content interesting, so you will not go wrong by reading this book for diversion."
— Xina Marie Uhl

"When you reach the end of Shapeshifters, it seems clear that, in addition to being a history, with most of its chapters focused on stories from antiquity through early modernity, Shapeshifters is very much a book of, and for, the twenty-first century as well. The greatest shapeshifters have always been human."
— PopMatters

"Inspiring and useful in understanding the cultural contexts that gave rise to stories of vampires, werewolves, and witches in the first place. . . . The moral of the story is that monsters change principally from within not from without, and it can be a two-way process. The choice is ours."
— Catholic Herald

"Do you know the origin of the word berserk? Have you heard about a community of vampires in Buffalo, New York? Do you think of Jesus as a shapeshifter? These are some examples of information from the ancient past to the present that you will find in Kachuba’s Shapeshifters. This is a short book packed full of interesting details from myths and legends from around the world, historical research that sifts through the beliefs about shapeshifters in different cultures, and many brief stories of the exploits, drama, and dangers associated with these sometimes frightening creatures whether animal, human, or supernatural in form. . . . This entertaining book is the type you’ll want to dip into according to your whims and use to further your own explorations on the topic. Recommended."
— Monster Librarian

"A thorough examination of shapeshifters, discussing their importance in religion, literature, folklore, and popular culture."
— Journal of Folklore Research

"For this reader, 'shapeshifter' initially suggested werewolves and vampires, and indeed two of this book’s ten chapters focus on these subjects. But the author has taken a broader approach, opening with the well-known Palæolithic cave painting 'The Sorcerer,' which supposedly depicts a shaman transforming into a deer. . . . A thorough survey of shapeshifters worldwide, past and present."
— Fortean Times

"This book is concise yet remarkably comprehensive, covering everything from werewolves and vampires to costume play and masquerades. It is also well-written, equally as entertaining as it is informative for any reader."
— Magonia Review of Books

"The book examines the history of the enduring shapeshifter archetype, which persists today, is found in almost every culture around the world and is believed by some to be more than myth. . . . [It] describes the various shapeshifter motifs such as discipline, avengement, or punishment, for example in The Frog Prince. Kachuba differentiates between those who have been involuntarily transformed through magic or a curse, and those who have voluntary control over their transformations and can shift at will between their human and transformed nature."
— Grammarye

“Kachuba has written a terrifically entertaining exploration of shapeshifting, from ancient folklore and fairy tales to Transformers and Twilight. I loved learning about skinwalkers, French werewolves, and where in Romania to buy a bottle of Dracula Merlot. This book offers fascinating insight into the origins of the stories we continue to tell about our desire ‘to be someone or something other than what we are.’"