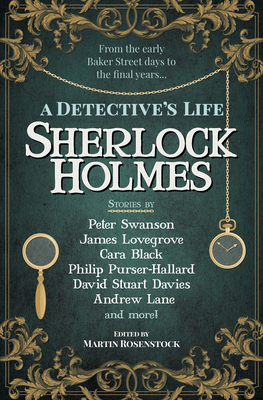 A brand-new collection of twelve Sherlock Holmes short stories which spans Holmes's entire career, from the early days in Baker Street to retirement on the South Downs.

Penned by masters of the genre, these Sherlock stories feature a woman haunted by the ghost of a rival actress, Moriarty's son looking for revenge, Oscar Wilde's lost manuscript, a woman framing her husband for murder, Mycroft's encounter with Moriarty and Colonel Moran, and many more!

Praise for Peter Swanson:
“Chilling and hypnotically suspenseful … could be an instant classic.” Lee Child

Praise for James Lovegrove:
"The pastiche is pitch-perfect; Lovegrove tells a thrilling tale and vividly renders the atmosphere of Victorian London." The Guardian

Praise for Philip Purser-Hallard:
"One of the cleverest locked room mysteries ever tackled by Sherlock Holmes… This ranks among the top novel-length Sherlock Holmes pastiches."
Publishers Weekly Starred Review

Praise for Eric Brown:
"Reads like a country-house whodunit from the golden age, packed with fascinating characters, each boasting a motive for murder" Kirkus Reviews

Praise for David Marcum:
"Marcum could be today's greatest Sherlockian writer, and Conan Doyle himself would be proud of this story." Lee Child

Praise for Cavan Scott:
"The original plot line is refreshing, and the portrayals of the leads are generally faithful to the Sherlock Holmes canon." Publishers Weekly

"Testament to the diversity that novella collections can bring.... A must for Holmes fans."
Paperbacks and Pinot

"If you're a Sherlock Holmes fan, you can't go too wrong with this collection"
The Dreamcage

"The Sign of Seven is a great way to spend a few hours for any mystery fan; enjoy losing yourself in not one but seven Sherlock Holmes mysteries!"
Snazzy Books