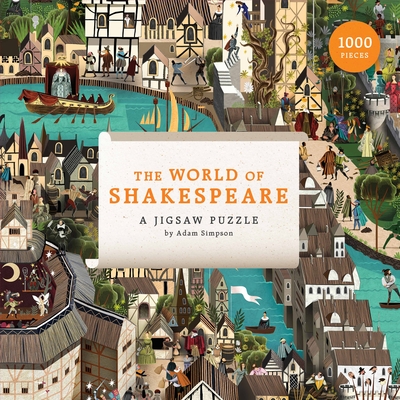 
On Our Shelves Now - Please Allow up to 24-48 hours for Curbside Pickup
1000 PIECE PUZZLE: This 1000-piece puzzle  features Shakespeare's London in glorious detail.
CAST OF CHARACTERS: Spot famous characters, fellow writers and historical characters as you build the puzzle.
INCLUDES PULL-OUT POSTER: Includes educational poster with fun facts about Shakespeare and his works.

Piece together the world of Shakespeare in this art jigsaw puzzle depicting the London of his day.

Spot a huge cast of contemporary extras as A Midsummer Night's Dream is rehearsed at the Globe and fellow actors wander the streets, along with local characters who may well have provided the Bard with inspiration. From lovers ascending ladders and bears being baited to tavern brawls and summer fetes, there is something to delight in every detail.

Laurence King Publishing's ‘The World Of…’ jigsaws are a fun way of celebrating the lives and works of creative greats. Also available in the series: The World of Frida Kahlo, The World of Jane Austen, The World of Sherlock Holmes, and more!
Adam Simpson's work always features a strong emphasis on drawing. He has contributed to major exhibitions in London, New York, Edinburgh, Bologna, and Japan. His work has been shortlisted for a British Design Award.