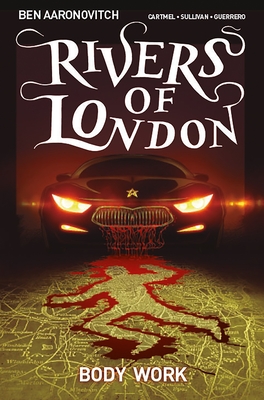 This is book number 1 in the Rivers of London series.

Peter Grant, having become the first English apprentice wizard in fifty years, must immediately deal with two different but ultimately inter-related cases. In one he must find what is possessing ordinary people and turning them into vicious killers, and in the second he must broker a peace between the two warring gods of the River Thames.
Ben Aaronovitch has written for TV, his credits including Doctor Who and Casualty; his Rivers of London novels have been international bestsellers and he has finally fulfilled his dream of adding a comic to the series; in this he has been joined by fellow writer and regular Doctor Who contributor Andrew Cartmel. The series is drawn by yet another Doctor Who creator, Matthew Dow Smith, who has also illustrated the likes of Hellboy, Supernatural: Origins and Sandman Mystery Theatre.
“The book is enjoyable on two levels, for both the complete novice and for the knowledgeable fan. A fun read.” - Nerdly

"Two things I love are magic, and a good mystery, so for me this is pretty much perfect.  Essential reading..." - Big Comic Page

"An enjoyable ride." - Down The Tubes

"It’s engaging, thrilling and has just enough of that real world work spliced with the magic/supernatural elements to make plausible and fantastical at the same time.” - Reading With A Flight Ring

“Body Work is an accomplished mystery and a well-created urban fantasy. Readers who are already hooked on the books will enjoy this series; readers who haven’t yet discovered Rivers of London will find this a good introduction." - Fangirl Nation

"Body Work is a delightful continuation of Aaronovitch’s story, capturing the spirit and tone of the novels and bringing them to life with what is essentially a quick crash course in the world of Rivers Of London for the uninitiated." - Geeky Girls Love Sci Fi

"The magic—or “falcon,” as police slang would have it—is pleasingly grounded here, creating a world of subtle intricacies rather than dazzling fireworks, and the supernatural is blended into the police procedural with satisfying realism. The characters are familiar but engaging enough, and the art does much to make each face distinctive and expressive as well as give the story its down-to-earth sturdiness."  - Booklist