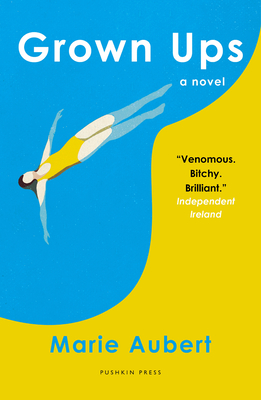 A whip-smart novel about modern motherhood and sibling rivalry, from one of Norway's rising stars--perfect for fans of Emma Straub and the films of Greta Gerwig!


Exhilarating, funny, and unexpectedly devastating, Grown Ups is for anyone who has ever felt the fear of being overtaken by a sibling, who feels almost--but not quite--grown up, and who's struggled to navigate a new future for themselves.

Ida is a forty-year-old architect, single and starting to panic. She's navigating Tinder and contemplating freezing her eggs, terrified that time has passed her by, silently, without her ever realizing it, which feels even more poignant and common in our COVID era.

All she sees are other people's children, everywhere.

Now stuck in the idyllic Norwegian countryside for a gathering to mark her mother's sixty-fifth birthday, Ida is regressing. She's fighting with her younger sister, Marthe, and flirting with her sister's husband. But when some supposedly wonderful news from Marthe heightens tensions further, Ida is forced to mark out new milestones of her own.
MARIE AUBERT made her debut in 2016 with the short story collection Can I Come Home With You, published to great acclaim in Norway. Grown Ups is her first novel; it won the Young People's Critics' Prize and was nominated for the Booksellers' Prize in Norway.

ROSIE HEDGER was born in Scotland. Her translation of Gine Cornelia Pedersen's Zero was shortlisted for the Oxford-Weidenfeld Translation Prize in 2019, and her translation of Agnes Ravatn's The Bird Tribunal won an English Pen Translates Award in 2016.
“This is cringe-comedy at its finest, with Aubert’s wry observations cranking things up well beyond eleven. Venomous. Bitchy. Brilliant.” --The Independent

“A succinct and thought-provoking exploration of the family unit and how it shapes individual lives.” --Sarah Gilmartin, The Irish Times

“Exploring the modern themes of dating apps and egg freezing, this is a real page turner with the impressive ability to be both hilarious and devastating.” -- Sophie Morris, the Independent

“…a really sensitive and thoughtful evocation of a sibling relationship, a family relationship, and an experience that women go through regardless of what walk of life they’re living. That was something that I just felt would have a very wide resonance.” --Hannah Westland, on BBC Radio 4’s Open Book