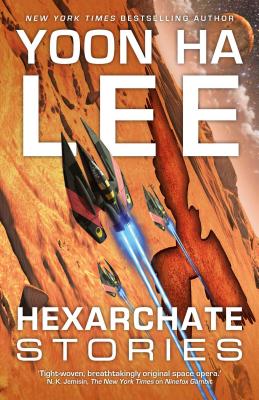 This is book number 4 in the The Machineries of Empire series.

The essential short story collection set in the universe of Ninefox Gambit.

An ex-Kel art thief has to save the world from a galaxy-shattering prototype weapon... A general outnumbered eight-to-one must outsmart his opponent... A renegade returns from seclusion to bury an old comrade...

From the incredible imagination of Hugo- and Arthur C. Clarke-nominated author Yoon Ha Lee comes a collection of stories set in the world of the best-selling Ninefox Gambit. Showcasing Lee's extraordinary imagination, this collection takes you to the very beginnings of the hexarchate's history and reveals new never-before-seen stories.
Yoon Ha Lee's debut novel, Ninefox Gambit, won the Locus Award for best first novel and was a finalist for the Hugo, Nebula, and Clarke awards. Its sequels, Raven Stratagem and Revenant Gun, were also Hugo finalists. His middle grade novel Dragon Pearl was a New York Times bestseller, and won the Mythopoeic Award and the Locus Award for YA. His most recent book is Tiger Honor, a companion novel to Dragon Pearl. Lee lives in Louisiana with his family and an extremely lazy cat, and has not yet been eaten by gators.