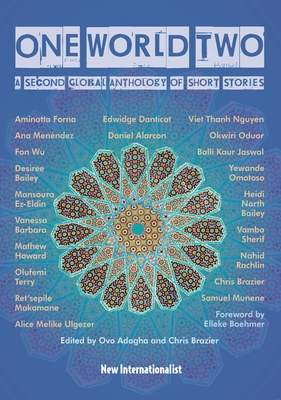 One World Two is the eagerly awaited follow-up to One World and another globe-trotting collection of stories. But it is more than simply an anthology of short fiction, as it contains representative literature from all over the world, conveying the reader on thought-provoking journeys across continents, cultures and landscapes.

One World Two is even more ambitious than Volume One in its geographic scope, featuring twenty-one writers drawn from every continent. Most of the stories are unique to this volume, while others are appearing for the first time in English (Egypt's Mansoura Ez-Eldin and Brazil's Vanessa Barbara). The themes and writing styles are as richly diverse as their writers' origins.

The collection is built around a loose theme of building bridges. It is interested in the human condition as a dynamic central line linking individuals, cultures and experiences: east and west, north and south, and, perhaps most importantly, past, present and future.

This book features established stars such as Edwidge Danticat (Breath, Eyes, Memory), Viet Thanh Nguyen (The Sympathizer) and Aminatta Forna (The Hired Man) and authors who are steadily building a reputation such as Fan Wu, Ana Men ndez and Daniel Alarcon.

Aminatta Forna: Aminatta Forna is a fiction writer and essayist and the award-winning author of the three novels The Hired Man, The Memory of Love and Ancestor Stones, and the memoir The Devil that Danced on the Water. She is winner of a Windham Campbell Prize and the Commonwealth Writers Best Book Prize among others, and a finalist for the Orange Prize, IMPAC, Samuel Johnson, BBC Short Story Prize and Neustadt Prizes. She is currently a Lannan Visiting Chair of Poetics at Georgetown University in Washington, DC. Edwidge Danticat: Edwidge Danticat is the author of several books, including Breath, Eyes, Memory (an Oprah Book Club selection), Krik? Krak! (a National Book Award finalist), The Farming of Bones, The Dew Breaker, Create Dangerously and Claire of the Sea Light. She is also the editor of The Butterfly's Way: Voices from the Haitian Dyaspora in the United States, Best American Essays 2011, Haiti Noir and Haiti Noir 2. She has written five books for young adults and children - Anacaona, Behind the Mountains, Eight Days, The Last Mapou and Mama's Nightingale - as well as a travel narrative, After the Dance. Her memoir, Brother, I'm Dying, was a 2007 finalist for the National Book Award and a 2008 winner of the National Book Critics Circle Award for autobiography. She is a 2009 MacArthur fellow. Her most recent book is Untwine, a young adult novel. Viet Thanh Nguyen: Viet Thanh Nguyen's first novel, The Sympathizer, has been listed as one of the best or most notable books of 2015 nearly twenty times, including in the New York Times, Publishers Weekly, Amazon.com, Kirkus Reviews, The Guardian, the Washington Post, and Library Journal. He is the author of Race and Resistance: Literature and Politics in Asian America and the co-editor of Transpacific Studies: Framing an Emerging Field. His latest book is Nothing Ever Dies: Vietnam and the Memory of War (Harvard University Press, 2016). He is an associate professor of English and American Studies and Ethnicity at the University of Southern California. Desiree Bailey: Desiree Bailey was born in Trinidad and Tobago and grew up in Queens, NY. She has a BA from Georgetown and an MFA in Fiction from Brown University. She has received fellowships from Princeton in Africa, the Norman Mailer Center, and Callaloo Creative Writing Workshop. She is a recipient of the 2013 Poets and Writers' Amy Award. Her work is published or is forthcoming in Callaloo, Best American Poetry, Muzzle, Blackberry and other publications. She is currently the fiction editor at Kinfolks Quarterly. Okwiri Oduor: Okwiri Oduor was born in Nairobi, Kenya. Her short story My Father's Head won the 2014 Caine Prize for African Writing as well as Short Story Day Africa's Feast, Famine and Potluck story contest. She was a 2014 MacDowell Colony Fellow. She is currently at work on her debut novel and pursuing an MFA in Creative Writing at the Iowa Writers' Workshop.