The Alpha Female Wolf: The Fierce Legacy of Yellowstone's 06 (Hardcover) 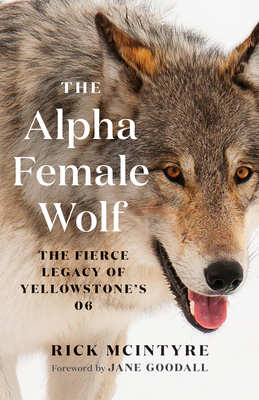 The Alpha Female Wolf: The Fierce Legacy of Yellowstone's 06 (Hardcover)

Book Four in the Award-Winning Alpha Wolves of Yellowstone Series

"Rick's writing is so vivid, so powerful, that I feel I have been right there with him among the wolves of Yellowstone. And I urge you, the reader, to come with us and discover the magic of wolf society."--DR. JANE GOODALL, DBE, Founder of the Jane Goodall Institute & UN Messenger of Peace

Yellowstone's 06 female was called 'the most famous wolf in the world.' Her strength, beauty, and intelligence were unmatched, and her ability to hunt, protect her young cubs, and choose the right mates made her pack successful. In his latest book, award-winning author and renowned wolf researcher Rick McIntyre turns his spotting scope on 06 and more remarkable female wolves, telling the dramatic true story of five generations of female leaders in Yellowstone National Park.

As Rick shows us, female wolves, not their male counterparts, play the most pivotal roles in pack life. They choose who may mate with them and where their pack will hunt and raise pups. They negotiate treaties and fiercely defend their families. The only opponent they cannot defeat is a human with a gun.

In The Alpha Female Wolf, McIntyre profiles 06's rise to power. He also celebrates the lives of other female wolves who deserve our recognition. Throughout, McIntyre weaves wolf biology and storytelling into a page-turning narrative that, once again, gives readers a rare window into life in a wolf pack--this time from a female point of view.

Rick McIntyre has spent more time observing and documenting wolves in the wild than any other person. A retired National Park ranger, McIntyre has spent more than forty years watching wolves in America's national parks, twenty-five of those years in Yellowstone, where he has accumulated over 100,000 wolf sightings, worked on the Yellowstone Wolf Reintroduction Project, and educated the public about the park's wolves. He lives in Silver Gate, Montana.