Death at the Savoy: A Priscilla Tempest Mystery, Book 1 (Paperback) 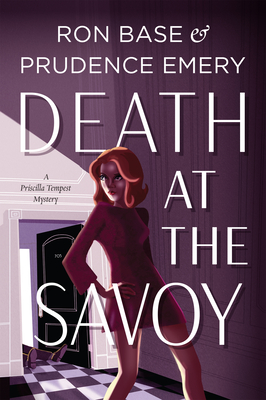 Death at the Savoy: A Priscilla Tempest Mystery, Book 1 (Paperback)

By Prudence Emery, Ron Base

An atmospheric, entertaining new mystery series introducing a plucky heroine and set in the world's most famous hotel.

It's 1968. London is in full swing and the Savoy Hotel is at the height of its legendary glitz and glamor, welcoming the rich, famous and aristocratic into its rarified world of perfection. Elizabeth Taylor and Richard Burton are squabbling in the American Bar while No l Coward drinks champagne. Royals wait upstairs in luxurious suites for discreet encounters. In short, all is as it should be at the Savoy.

Could it be murder at the Savoy? Impossible Who could have done such a thing?

Suspicion falls upon Priscilla Tempest, the quick-witted head of the Savoy press office who has a penchant for champagne, the wrong sort of men--and trouble.

When it is discovered that Priscilla had been with the deceased--a notorious international arms dealer--the night before he was found dead, she is questioned by Scotland Yard Inspector Robert "Charger" Lightfoot and is suddenly under the unforgiving eye of her boss, the Savoy's straitlaced general manager, Clive Banville. Her job on the line, her life in danger, Priscilla must elude the police and the general manager's duplicitous wife, ward off the amorous advances of a famous drunken actor, and discover whether that really was a member of the royal family seen leaving the victim's suite shortly before his body was discovered.

Death at the Savoy is an intoxicating blend of mystery, suspense and humor. And it's just the beginning