Are Men Obsolete?: The Munk Debate on Gender: Rosin and Dowd vs. Moran and Paglia (Paperback) 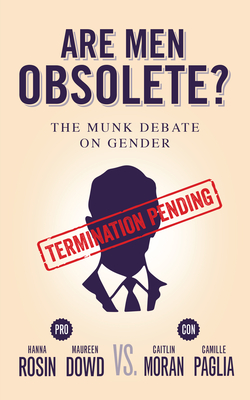 For the first time in history, will it be better to be a woman than a man in the upcoming century? The twelfth semi-annual Munk Debate pits renowned author and editorHanna Rosin and Pulitzer Prize-winning columnist Maureen Dowd against New York Times-bestselling author Caitlin Moran and academic trailblazer Camille Paglia to debate one of the biggest socio-economic phenomena of our time -- the relative decline of the power and status of men in the workplace, in the family, and society at large. Men have traditionally been the dominant sex. But now, for the first time, a host of indicators suggests that women not only are achieving equality with men, but are fast emerging as the more successful sex of the species. Whether in education, employment, personal health, or child rearing, statistics point to a rise in the status and power of women at home, in the workplace, and in traditional male bastions such as politics. But are men, and the age-old power structures associated with "maleness," permanently in decline? With women increasingly demonstrating their ability to "have it all" while men lag behind, the Munk Debate on gender tackles the essential socio-economic question: Are men obsolete?

Hanna Rosin is the author of the definitive book on the decline of men and maleness in modern society, The End of Men. She is a senior editor at The Atlantic and a founder and editor of DoubleX. She lives in Washington, D.C. Maureen Dowd is the author of a hard-hitting New York Times weekly column on politics and culture. She has received the Pulitzer Prize for distinguished commentary and is the author of the bestselling book, Are Men Necessary? She lives in New York City. Caitlin Moran is a British broadcaster, TV critic, and writer for the Times of London. She's the author of the international bestseller How to Be a Woman. She lives in London. Camille Paglia is recognized as one of the world's top 100 public intellectuals by Foreign Policy and Prospect. She's currently a professor of humanities and media studies at the University of the Arts in Philadelphia, and the author of Sexual Personae: Art and Decadence from Nefertiti to Emily Dickinson. She lives in Philadelphia, PA.