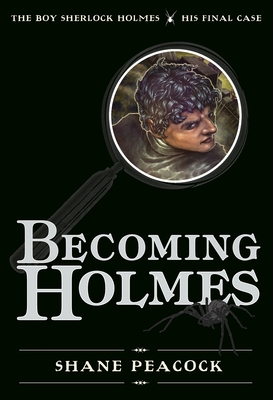 This is book number 6 in the The Boy Sherlock Holmes series.

The surprising and shocking conclusion to the unique BOY SHERLOCK HOLMES series.

Becoming Sherlock is the final book in Shane Peacock's award-winning Boy Sherlock Holmes series, combining brilliant storytelling with fascinating historical detail, and a mystery worthy of one of the greatest sleuths in English literature.
Shane Peacock was born in Thunder Bay, Ontario, and grew up in Kapuskasing. A biographer, journalist, and screenwriter, he is also the author of several novels and plays. He has received many honors for his writing, including the prestigious Arthur Ellis Award for Eye of the Crow and the Geoffrey Bilson Award for Historical Fiction for Vanishing Girl, both titles in his boy Sherlock Holmes series. Shane Peacock lives with his wife and three children near Cobourg, Ontario

“And so the end comes to the beginning of the story of the world’s most beloved detective….The series has courageously woven together famous people, popular myths and the street-level views of London. The mysteries, themselves, contain the illusive clues so reminiscent of Doyle’s work…. The story is ripe with premonitions…. Readers … will find this a satisfactory and hang-on-to-your-seat read. It was sad to know this is the final installment....”
–Highly Recommended, CM Magazine

“…Peacock concludes his stellar saga with a final mystery…. This is a solid period mystery. Peacock once again uses London as a character…. Such characters as Irene Doyle, Malefactor (who will become Moriarty), Lestrade, and even a whiff of Watson all contribute to a feeling of authenticity … this is a strong story. The ending is exciting and unexpected. This is an excellent conclusion to a wonderful series.”
— VOYA Magazine