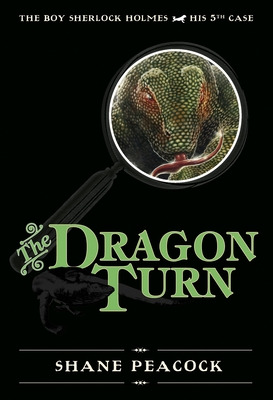 This is book number 5 in the The Boy Sherlock Holmes series.

Summer 1869, and Sherlock Holmes and his friend Irene celebrate her sixteenth birthday by attending the theater to watch a celebrated magician make a real dragon appear on stage. It is the London sensation. Sherlock and Irene meet the magician, Alistair Hemsworth – just as he is arrested for the murder of his rival, The Wizard of Nottingham.

It seems that traces of the missing Wizard’s blood and his spectacles were found in Hemsworth’s secret studio. Hemsworth has a motive: not only is the Wizard his rival, but he also caused a scandal when he lured Hemsworth’s wife away. But is Hemsworth guilty? Sherlock has his doubts, and soon, so does the reader.

With humor and plot turns as dizzying as a narrow London lane, Shane Peacock invites his readers into a fascinating world, and a fresh adventure with one of literature’s favorite characters. The Boy Sherlock Holmes series is an international success with readers and reviewers alike.
Shane Peacock was born in Thunder Bay, Ontario, and grew up in Kapuskasing. A biographer, journalist, and screenwriter, he is also the author of several novels and plays. He has received many honors for his writing, including the prestigious Arthur Ellis Award for Eye of the Crow and the Geoffrey Bilson Award for Historical Fiction for Vanishing Girl, both titles in his boy Sherlock Holmes series. Shane Peacock lives with his wife and three children near Cobourg, Ontario
“…The Dragon Turn is a wonderful book. I think its target audience will love it for its adventure, mystery and characters, and, as an older reader, I enjoyed it for the way Peacock wrote Sherlock Holmes.”
—Literary Treats

“…Peacock’s fifth mystery featuring the boy Sherlock Holmes does not disappoint. Drama, love, and a fine trail of clues lead the reader through another memorable romp into the heart of a Victorian murder mystery. This historical novel is rich in detail, setting, and culture.”
—Highly Recommended, CM Magazine

“…Shane Peacock delivers another intriguing novel exploring the boy detective…. His Sherlock is a penniless but resourceful young man living with an eccentric apothecary who encourages his curiosity and his powers of observation….”
—Winnipeg Free Press

“With a trail of clues, a cast of shady characters, and even a hint of romance, The Dragon Turn has more twists and turns than a carnival ride and will keep readers guessing until its satisfying conclusion… Peacock is a master storyteller, and his richly imagined details of murder, revenge, betrayal, theatre, magic and exotic dragons combine to create an absolute page-turner of a book.”
—TD Canada Trust Canadian Children's Literary Award Jury Comments

“Peacock flawlessly recreates the London of the Victorian era… Readers feel as if they are walking along with the young Sherlock Holmes as he begins to awaken to his prodigious skills and fights to figure out how a magician can make a dragon appear… and disappear… Beautifully written with whip-smart dialogue.”
— John Spray Mystery Award, Jury Comments