For the People, Against the Tide: A Democratic Woman's Ten Years in the Massachusetts Legislature (Paperback) 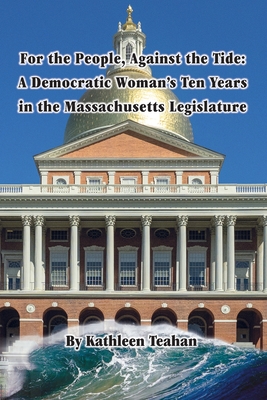 For the People, Against the Tide: A Democratic Woman's Ten Years in the Massachusetts Legislature (Paperback)

For the People, Against the Tide is part topical memoir, part handbook for concerned citizens thinking about getting involved in the political process, but intimidated by practically everything in our modern American political process. This first-hand account of the reality of holding elected office demystifies the legislative process and the realities of modern political life.

Kathleen Teahan, a Massachusetts State Legislator from 1997-2007, pulls back the curtain on the challenges of serving in government. With stories and specific examples from her ten years as a state representative, Teahan offers the inspiration and the steps concerned citizens can take to speak up, use the power of their vote, volunteer in campaigns, and run for office.

Read below, what two former Massachusetts governors, Michael Dukakis and Deval Patrick, say about For the People, Against the Tide.

"What do state legislators do? In fact, if they are public servants like Kathy Teahan, they do a lot-seven days a week. Yes, they legislate, but they never stop working in their districts in countless ways. This book and Kathy Teahan tell you how and why-as critical links between citizens and their governments at every level. And she does it in a way that helps us understand just how important they are in bringing state and local governments directly to the people they serve."

"As a persistent legislator, and a careful listener, Kathy Teahan brought her faith in our civic values and in people to our state, influencing jaundiced veteran politicians and wide-eyed newcomers alike, and gave voice to the voiceless. Her memoir reminds us of the power of her optimism."