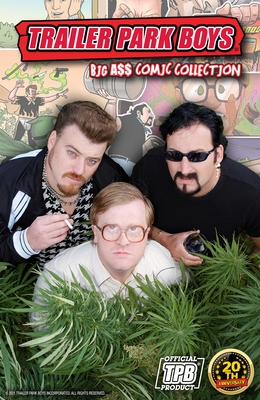 
Email for availability
Trailer Park Boys is a documentary-stye comedy about the inhabitants of Sunnyvale Trailer Park, located in beautiful Nova Scotia, Canada.

Like the show, this graphic novel antholgy follows the exploits of Sunnyvale's most notorious residents, Ricky, Julian, and Bubbles as the attempt to make money through various outrageous and greasy (and mostly illegal) get-rich-quick schemes, hotly pursued by the park's drunken supervisor, Jim Lahey, and his shirtless sidekick Randy.

The Trailer Park Boys Get A F#¢*!ng Comic Book! The boys are back, in comic form, for a hilarious, filthy, and totally unpredictable anthology series. There's guns, babes, booze and bud. Plus, meet the Prehistoric Park Boys, see The Green Bastard wrestle and learn the secret origin of Julian's answering machine.
Josh Blaylock has been a nationally recognized comic book author and artist since his self-publishing debut in 1996. His fame rose in the early 2000s with the formation of Devil’s Due Comics, and the acquisition of the then-dormant G.I. Joe comic book license, which he re-launched in partnership with Image Comics to the top of the charts, and ignited an entire resurgence of 1980s cartoon properties in the comic book space. In addition to dozens of different comic books written in his career, his creator-owned series Mercy Sparx, published by Devil’s Due, was optioned for film by MGM Studios in 2020. Other notable work includes the political tribute (and satire) Alexandria Ocasio-Cortez and the Freshman Force: New Party, Who Dis? (receiving over 1 billion media impressions around the globe),  the graphic novel  thriller Operation Nemesis, commemorating the 100th anniversary of the Armenian Genocide, and the non-fiction prose How to Self-Publish Comics: Not Just Create Them (made required reading at Savannah College of Art & Design). Outside of comics, Blaylock is a recognized expert in the cryptocurrency space, leading to the creation of The Bitcoin Comic Handbook, a guide to understanding the disruptive technology. Josh’s current active comic book projects continue to be Mercy Sparx and the sci-fi / fantasy series ArkWorld  and The Encoded.

Hoyt Silva was born in 1987 in New York City, Astoria, Queens to be exact. Since then, Hoyt's life and career path have taken hil all over the United States from Pennsylvaia, Florida, California, and to his current residence in Atlanta, Georgia.

After meeting his mentor, teacher, and close friend Brian Selfreeze, in 2011 at a convention in San Francisco, Hoyt has continued to grow and evolve bringing new innovation and dramatic storytelling to the comics medium. Using a unique style influenced by the lifes of Stelfreeze, Rob Hanes, and Mike Mignola to name a few. Hoyt, has crafted something very much his own and he's always looking forward to whatever sprouts up next.

Colin was once a Writer/Producer at WWE, writing for acts like The New Day, The Usos, Enzo and Cass, and several other top-tier talents. Before that, he worked as an assistant for Vince McMahon. Currently, Colin is in charge of Marketing and Social Media for a burgeoning comic book company in NYC. When he's not working, Colin can be found DJ'ing Techno Music, or crying on his stoop in Brooklyn.

Allison Mick is an Oakland-based comedian and writer originally from Rochester, NY. She draws from her upbringing and personal experiences to address topics like race, gender, and serial killers. Allison is a staff writer for The Hard Times, Macaulay Culkin’s , and has had work featured on HuffPo. She’s performed at SF Sketchfest, Out of Bounds Fest, and Bird City Comedy Festival. In 1997, she was featured in the book “Humor Works” by Dr. John Morreall, the founder of the International Society for Humor Studies and has managed to stay very grounded despite this wild literary fame.

Matt Merhoff is a comic book artist and illustrator from Los Angeles. He is best known for his work on Mercy Sparx with Josh Blaylock. When not drawing he enjoys watching costumed people punch and kick each other.