The Darkness Within: The Complete Series (Paperback) 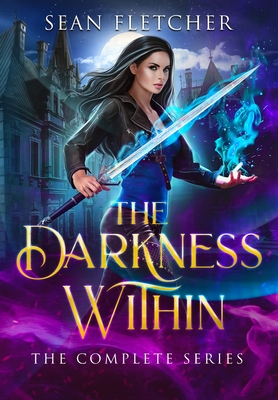 The Darkness Within: The Complete Series (Paperback)


Available from Our Distributor (Not in Store)
This box set includes all four books in the Darkness Within YA urban fantasy series. Magical academies, twisting mysteries, and a slow burn enemies-to-lovers romance all end in a stunning conclusion you'll be racing to finish

How can she stop evil if she can't even control the darkness within herself?

Skylar's world is comprised of a few things:

Getting out from under her famous mother's shadow.

Making it through the Academy of Magic without getting herself killed.

And trying not to murder the devilishly handsome, so-infuriating-she-wants-to-strangle-him Asher once they're partnered with each other.

So when she discovers a new baddie gathering power in her city, someone with insane magic and a powerful grudge against her family, Skylar knows it's her chance to step up to stop them.

The only problem? Skylar's got magic of her own. Dark magic. Uncontrollable magic. Magic she has to keep hidden.

As maddening as Asher is, she'll have to work with him if she wants any chance at stopping this new threat. But with her darkness growing more powerful by the day, hiding what she is will likely be impossible. And soon, her biggest enemy just might be herself...

If you love fast-paced fantasies full of snark, heart, incredible magic, and a slow-burn romance then you'll love the complete Darkness Within series

This bundle contains all four books in the Darkness Within series: