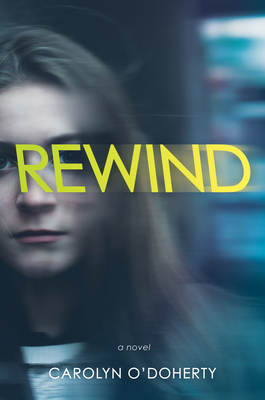 This is book number 1 in the Rewind series.

In this unique, fast-paced twist on the time-travel genre and the first book in a trilogy, sixteen-year-old Alex is a spinner—one of a rare few who can rewind time to review past events at a devastating cost

Hated and feared because of her ability to find the truth, sixteen-year-old Alex lives with the rest of the small population of spinners at Centers—compounds created to house and protect them. Alex's society uses the spinners' skills to solve major crimes but messing with time comes with consequences: no spinner ever lives past the age of twenty.

At sixteen, Alex is in her prime—until time sickness strikes early. When she is offered an experimental treatment, Alex sees a future for herself for the first time. But the promising medication offers more than just a cure—it also brings with it new alarming consequences.
Carolyn O'Doherty received her MFA from Stonecoast at the University of Southern Maine. She lives in Portland, Oregon, with her husband and two teenage sons. This is her debut novel. Visit carolynodoherty.com.
“This debut set amid the backdrop of Portland, OR, will not disappoint teens interested in fast-paced, supernatural science fiction. Human experimentation, crime investigation, and test of friendships will keep readers engaged and asking important questions about science. This book has good character growth with a strong female antagonist. A great quick pick for reluctant readers.” –School Library Journal

“The fast-paced plot, …(a) likable, multiethnic supporting cast and a whiff of endearing romance round out this promising debut. A twisty and satisfying page-turner.” –Kirkus Reviews

“O’Doherty’s debut drops readers into (the) world of spinners…Her pacing is impeccable; readers will keep turning pages.…(and) will certainly be willing to return to the spinner world.” -Booklist

“O’Doherty’s debut novel skillfully builds a world where…time travel is vivid and believable, and the police thriller aspect makes it exciting. Even reluctant readers will be drawn into this story.” - School Library Connection

“(An) intriguing sci-fi thriller…(with) a solid premise, memorable characters, and a fast-paced plot... this is a worthwhile setup for future installments in the proposed trilogy.” –Publishers Weekly

“The suspense and tension mount to the final page of this debut novel…Great pacing, well-developed characters, and time travel combined with crime solving ensures a broad audience, none of whom will be disappointed.” - VOYA