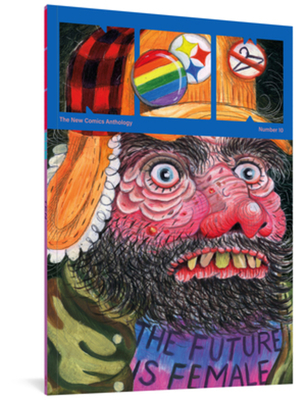 The tenth issue of the Eisner Award-nominated anthology series includes new work by fan favorites, new discoveries, and rare gems, such as cult cartoonist Richard Sala’s unpublished juvenilia. It’s an entire comic book store under one cover — at a price that can’t be beat!

As Now hits its landmark tenth issue, what better time to bring back the cover artist who launched the series? Painter and cartoonist Rebecca Morgan (Instagram: @rebeccamorgan10) returns with one of her signature depictions of the underbelly of America. Meanwhile, the issue also features new work by a number of familiar names, such as Steven Weissman (Instagram: @wei_ss_man), Tim Lane (timlaneillustration.com), and Walt Holcombe (Twitter: @WaltHolcombe). Young Frances creator Hartley Lin (popehats.ca / Instagram: @hartley._.lin) contributes his first piece to the magazine, as does Italian cartoonist Silvia Rocchi (silviarocchi.com) and American cartoonist M.S. Harkness (msharkness.com / Instagram: @m.s.harkness / Twitter: @msharkness) — with a piece about competitive weightlifting during the COVID-19 pandemic!

Along with other surprises, Now #10 includes one other special feature: a tribute to the late cartoonist Richard Sala (1954-2020), a cartoonist who built his long career contributing to various anthologies of the 1980s, including the legendary Raw magazine. We are pleased to present nine previously unpublished pages of comics by Sala, all created as an art student in the 1970s and presaging a prolific and brilliant oeuvre to come. Also: comics by Nick Thorburn (Instagram & Twitter: @NickfromIslands), Jacob Weinstein (jacob-weinstein.com), Joakim Drescher (Instagram: @joakimdrescher), and Julia Gfrörer (thorazos.net / Instagram & Twitter: @thorazos).

Richard Sala (1954–2020) grew up in Chicago. He had an MFA from Mills College, collaborated with Lemony Snicket, and illustrated a Jack Kerouac script. He spent his time in Berkeley, CA.

Eric Reynolds is the VP/Associate Publisher of Fantagraphics Books. He has curated well over 4,000 pages of comics anthologies, between ten volumes of Now, 22 volumes of Mome from 2005-2010, and several Free Comic Book Day anthologies for Fantagraphics. He lives in Seattle, WA, with his wife and daughter.

Hartley Lin s a cartoonist based in Montreal, Canada. Young Frances, the first collection from his ongoing comic book Pope Hats, won the 2019 Doug Wright Award for Best Book. He has drawn for The New Yorker, The Hollywood Reporter, Slate, Taddle Creek and HarperCollins.

M.S. Harkness is an autobio cartoonist from Minneapolis, Minnesota. A recipient of the Minnesota State Arts Board Visual Artist grant, she's been published by Uncivilized Books, Kilgore Comics and Tinto Press.

Editor Eric Reynolds has assembled a group of cartoonists who are fiercely confident in their unique approaches to comic book storytelling.
— The A.V. Club