The Pursuit of the Pankera: A Parallel Novel about Parallel Universes (Hardcover) 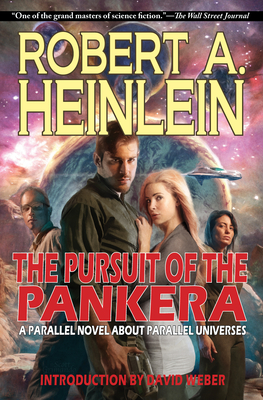 The Pursuit of the Pankera: A Parallel Novel about Parallel Universes (Hardcover)

By Robert A. Heinlein, David Weber (Introduction by)


Available from Our Distributor (Not in Store)
National Bestseller

"An absolutely essential and 'must read' novel for the legions of Robert Heinlein fans, The Pursuit of the Pankera: A Parallel Novel About Parallel Universes is an extraordinary work of science fiction"--Midwest Book Review

"Heinlein still offers a rollicking ride even after all these years."-- The Oklahoman

The Pursuit of the Pankera is one of the most audacious experiments ever done in science fiction by the legendary author of the classic bestseller Starship Troopers.

Robert A. Heinlein wrote The Number of the Beast, which was published in 1980. In the book Zeb, Deety, Hilda and Jake are ambushed by the alien "Black Hats" and barely escape with their lives on a specially configured vehicle (the Gay Deceiver) which can travel along various planes of existence, allowing them to visit parallel universes.

From that point on the plot lines diverge completely. While The Number of the Beast morphs into something very different, more representative of later Heinlein works, The Pursuit of the Pankera remains on target with a much more traditional Heinleinesque storyline and ending, reminiscent of his earlier works.

The Pursuit of the Pankera was never published and there have been many competing theories as to why (including significant copyright issues in 1977). Over time the manuscript was largely forgotten but survived in fragments. A recent re-examination of these fragments, however, made it clear that put together in the right order they constituted the complete novel.

And here it finally is: Robert A. Heinlein's audacious experiment. A fitting farewell from one of the most inventive science fiction writers to have ever lived: a parallel novel about parallel universes as well as a great adventure pitting the forces of good versus evil only the way Heinlein could do.

AUTHORED BY ROBERT A. HEINLEIN Robert Anson Heinlein (July 7, 1907 - May 8, 1988) was an American science-fiction author, aeronautical engineer, and retired Naval officer officer and the author of such classic bestsellers as Starship Troopers, The Moon is a Harsh Mistress and Stranger in a Strange Land. Sometimes called the "dean of science fiction writers", he was among the first to emphasize scientific accuracy in his fiction, and was thus a pioneer of the sub-genre of hard science fiction. His published works, both fiction and non-fiction, express admiration for competence and emphasize the value of critical thinking. His work continues to have an influence on the science-fiction genre, and on modern culture more generally. Heinlein became one of the first American science-fiction writers to break into mainstream magazines such as The Saturday Evening Post in the late 1940s. He was one of the best-selling science-fiction novelists for many decades, and he, Isaac Asimov, and Arthur C. Clarke are often considered the "Big Three" of English-language science fiction authors. Notable Heinlein works include Stranger in a Strange Land, Starship Troopers (which helped mould the space marine and mecha archetypes) and The Moon Is a Harsh Mistress. His work sometimes had controversial aspects, such as plural marriage in The Moon is a Harsh Mistress, militarism in Starship Troopers and technologically competent women characters that were strong and independent, yet often stereotypically feminine - such as Friday. Heinlein used his science fiction as a way to explore provocative social and political ideas, and to speculate how progress in science and engineering might shape the future of politics, race, religion, and sex. Within the framework of his science-fiction stories, Heinlein repeatedly addressed certain social themes: the importance of individual liberty and self-reliance, the nature of sexual relationships, the obligation individuals owe to their societies, the influence of organized religion on culture and government, and the tendency of society to repress nonconformist thought. He also speculated on the influence of space travel on human cultural practices. Heinlein was named the first Science Fiction Writers Grand Master in 1974. Four of his novels won Hugo Awards. In addition, fifty years after publication, seven of his works were awarded "Retro Hugos"--awards given retrospectively for works that were published before the Hugo Awards came into existence. In his fiction, Heinlein coined terms that have become part of the English language, including "grok", "waldo", and "speculative fiction", as well as popularizing existing terms like "TANSTAAFL", "pay it forward", and "space marine". He also anticipated mechanical computer-aided design with "Drafting Dan" and described a modern version of a waterbed in his novel Beyond This Horizon, though he never patented nor built one. In the first chapter of the novel Space Cadet he anticipated the cell-phone, 35 years before Motorola invented the technology. Several of Heinlein's works have been adapted for film and television. [adapted from Wikipedia] INTRODUCTION BY DAVID WEBER David Mark Weber (born October 24, 1952) is an American science fiction and fantasy author. He has written several science-fiction and fantasy books series, the best known of which is the Honor Harrington science-fiction series and has had a number of New York bestsellers. His books are also a regular selection for the Science Fiction Book Club.