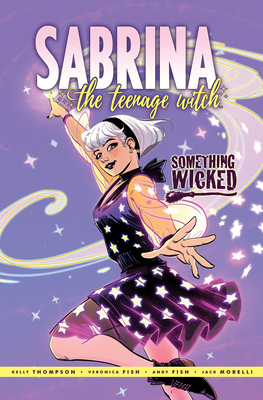 
Available from Our Distributor (Not in Store)
You demanded it: Volume Two of the critically-acclaimed Sabrina the Teenage Witch series by Kelly Thompson and Veronica & Andy Fish!

Sabrina saved the day--saved her friends, her family--the whole town of Greendale really, and she should be riding high. But things are never quite that simple. She's trapped in a love triangle, she's having trouble balancing the mortal and witch parts of herself, oh yeah, and she's being blackmailed. As if all that wasn't enough, while trying to help Radka and Ren with their...supernatural problem, her aunts suddenly starting to look like people she can't trust. What's a teen witch to do?!
Kelly Thompson is an American writer of novels and comic books. She is best known for the Jem and the Holograms comic with co-creator and artist Sophie Campbell, a modern reimagining of the 1980s cartoon of the same name. Her HAWKEYE run from Marvel was nominated for an Eisner in 2018 and she's currently writing the monthly comics WEST COAST AVENGERS and ROGUE & GAMBIT for Marvel as well as NANCY DREW for Dynamite.

Veronica Fish is an artist based in MA. Her paintings have been shown in galleries around the world, and she's done a lot of neat things like character design, storyboarding for film + TV, apparel design, and editorial illustration. She developed "Helmutt the Dog" for the Worcester Art Museum.

In comics, she has drawn issues of the Archie reboot, Silk, Howard the Duck and Spider-Woman for Marvel. She was also the artist for Pirates of Mars by JJ Kahrs, The Wendy Project by Melissa Osbourne and SLAM! for Boom Studios.
[A] bewitching story befitting of any magical girl. - ComicBook.com

'Something Wicked' is the blast of positive magical energy that we desperately need right now. It's so good to see Sabrina back in action. - AIPT

Sabrina the Teenage Witch: Something Wicked is a charming mix of teenage drama and horror. It's perfect for young adult readers that want some scares with their relationship stories. - Horror DNA

Sabrina is back and better than ever, and by better, I mean she's in way over her head and I'm here for that sweet, sweet drama. - Multiversity Comics

Sabrina: Something Wicked #1 was worth the wait for the way that this creative team further immersed us into this world they are creating for Sabrina. - Beyond the Panel

It's a comic which packs a surprising punch in terms of deeper content to suss out and unpack. - Newsarama