When the Shadbush Blooms (Paperback) 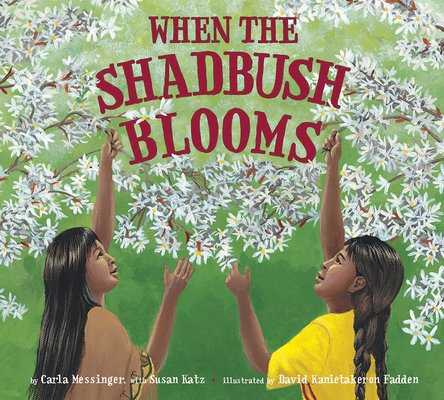 When the Shadbush Blooms (Paperback)

A young Lenape Indian girl observes and reflects on the small, important ways her family today, and her ancestors generations before, celebrate the cycle of seasons.

Today when a Lenape Indian girl ventures to the stream to fish for shad, she knows that another girl did the same generations before her. Through the cycle of the seasons, what is important has remained: being with family, knowing when berries are ripe for picking, listening to stories in a warm home. Told by Traditional Sister and Contemporary Sister, each from her own time, this is a book about tradition and about change. Then and now are not so very different when the shadbush blooms.

CARLA J. S. MESSINGER, Turtle Clan Lenape, is a cultural educator and the director of Native American Heritage Programs. She lives in Allentown, Pennsylvania, with her husband Allan and daughter Joy. You can visit her online at lenapeprograms.info. SUSAN KATZ has written eight children's books, including the prize-winning novel, Snowdrops for Cousin Ruth. She lives in North Wales, Pennsylvania near her grown son Demian and his family, and half a block from the local library. DAVID KANIETAKERON FADDEN, Wolf Clan Mohawk, was born in Lake Placid, New York, and grew up in nearby Onchiota in a family of artists, naturalists, and storytellers. David's illustrations have appeared in books, periodicals, animations, and on television. He also works as the Museum Coordinator at the Native North American Travelling College and helps run his grandfather's museum, the Six Nations Indian Museum, during the summer months. David lives in Akwesasne, Ontario, Canada. His artwork is online at https: //www.abunchofpeople.ca/david-kanietakeron-fadden-vernissag and http: //www.sixnationsindianmuseum.com/contemporary.