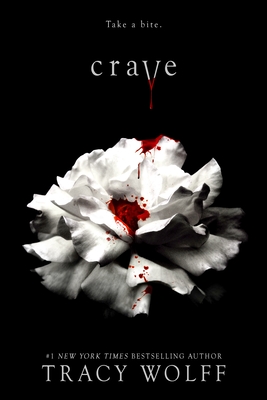 This is book number 1 in the Crave series.

My whole world changed when I stepped inside the academy. Nothing is right about this place or the other students in it. Here I am, a mere mortal among gods…or monsters. I still can’t decide which of these warring factions I belong to, if I belong at all. I only know the one thing that unites them is their hatred of me.

Then there’s Jaxon Vega. A vampire with deadly secrets who hasn’t felt anything for a hundred years. But there’s something about him that calls to me, something broken in him that somehow fits with what’s broken in me.
Which could spell death for us all.

Because Jaxon walled himself off for a reason. And now someone wants to wake a sleeping monster, and I’m wondering if I was brought here intentionally—as the bait.

Don’t miss a single book in the series that spawned a phenomenon! The Crave series is best enjoyed in order:
Crave
Crush
Covet
Court
Charm
Cherish

New York Times and USA Today bestselling author Tracy Wolff is a lover of vampires, dragons, and all things that go bump in the night. A onetime English professor, she now devotes all her time to writing dark and romantic stories with tortured heroes and kick-butt heroines. She has written all her sixty-plus novels from her home in Austin, Texas, which she shares with her family. tracywolffbooks.com
“Crave is about to become fandom’s new favorite vampire romance obsession. If you need any further evidence of how much you’ll enjoy this book, Universal Studios picked up the film rights… I will absolutely be first in line.” -Hypable