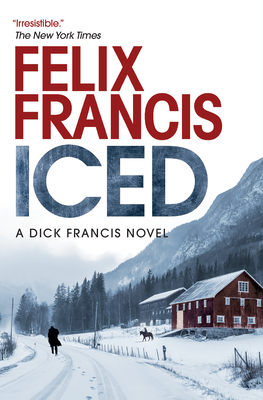 
Available from Our Distributor (Not in Store)
In the tradition of Clive Cussler and James Lee Burke, Iced, the latest in Francis's fictional world, is a heart-pounding thriller that will keep you racing to the next page.

Seven years ago, Miles Pussett was a steeplechase jockey, loving the rush of the race. But after an unfortunate event, he left horseracing behind and swore he would never return. Now he gets his adrenaline rush from riding headfirst down the Cresta Run, a three-quarter-mile Swiss ice chute, reaching speeds of up to eighty miles per hour.

Finding himself in St Moritz during the same weekend as White Turf, when high-class horseracing takes place on the frozen lake, he gets talked into helping out with the horses. Against his better judgement, he decides to assist, but things aren’t as innocent as they seemed.

When he discovers something suspicious is going on in the races, something that may have a profound impact on his future, Miles begins a search for answers. But someone is adamant about stopping him—and they’ll go to any length to do it.
The New York Times, The London Sunday Times and International bestseller, acclaimed author, Felix Francis, was born in Oxford, England, son of the famous mystery author, Dick Francis and his wife, Mary Francis. Felix graduated from London University. His initial career led him into physics, where he was a successful teacher of A Level Physics. But he could not deny that his family’s gift of writing had been passed along to him, and he started his second career—as an author—where he found his knowledge of physics was a great advantage. His many other accomplishments include being an expert outdoorsman, marksman and pilot. Felix Francis resides in England with his wife, Debbie, their family and two Irish Setters and a Cavapoo.
Praise for Iced:
“Brilliant all around.”
—Booklist, starred review

“Wonderfully evocative...riveting throughout. Exciting at every turn.”
—Booklist, starred review on Pulse

“Another trip to the winner’s circle for the talented Francis.”
—Booklist, starred review on Crisis

"Francis devises a subtle, clever scheme for the heart of the mystery, and he excels at making his broken lead credible and sympathetic.”
—Publishers Weekly, on Pulse