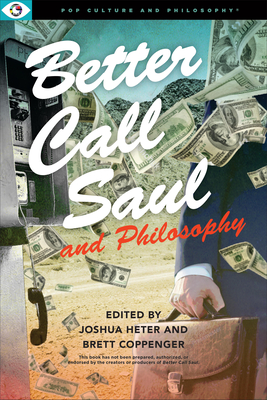 Better Call Saul and Philosophy: I Think Therefore I Scam is a collection of twenty-three essays exploring the philosophical themes in the hit television show Better Call Saul, a prequel to the TV show Breaking Bad. The sixth and final season of Better Call Saul, with thirteen episodes, began airing in April 2022.

The central character is Jimmy McGill, whom we know from Breaking Bad as Saul Goodman. In Better Call Saul he first takes the name of Saul Goodman from the phrase "S'all Good, Man " Jimmy/Saul is a natural con artist who not only scams from self-interest but also because he enjoys it. He has a strange relationship with his brother, the distinguished lawyer Charles McGill, who resents Jimmy's delinquency and advantage in parental affection. Jimmy/Saul becomes a lawyer for a drug cartel, and most of the people he meets are criminals and other kinds of villains. Like Breaking Bad, Better Call Saul raises a wide range of philosophical issues including the nature of good and evil, personal identity, free will and determinism, the law as it relates to morality, the ethical implications of the war on drugs, death and dying, and many more. Better Call Saul and Philosophy offers thoughtful fans of the show deeper and more provocative insights into the story and the characters. Topics covered include: the morality of keeping promises to wrongdoers, the nature of psychosomatic illness, difficult moral choices facing lawyers, just how good or bad are some of the compromised characters in the show, the unintended consequences of the War on Drugs, the similarities between drug cartels and governments, whether bad people are just unlucky, the perils of self-deception, and whether we ever really have much of a choice. Better Call Saul and Philosophy is Volume 8 in the path-breaking series, Pop Culture and Philosophy.
Brett Coppenger is the co-editor of Intellectual Assurance: Essays on Traditional Epistemic Internalism. He is also a contributing author in Conspiracy Theories: Philosophers Connect the Dots and The Mystery of Skepticism: New Explorations, both titles from Open Court Publishing. Brett is currently an Associate Professor of Philosophy at Tuskegee University in Alabama.