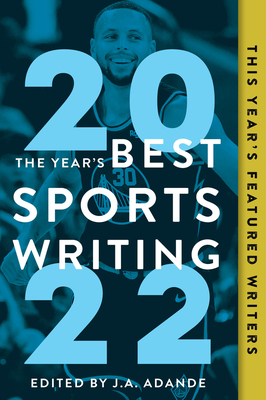 
Available from Our Distributor (Not in Store)
J.A. Adande, ESPN personality and Director of Sports Journalism at Northwestern University's Medill School of Journalism, has curated an essential anthology showcasing incredible feats and diverse perspectives across the world of sports.

Selected from a wide range of newspapers, magazines, and digital publications during the previous year, these stories capture enduring moments while celebrating the craft of writing at its most sublime.

This extraordinary collection reveals the fascinating stories behind the sports we love, the competitors who push their boundaries, and the cultures they are ultimately embedded in.
J.A. Adande is the director of sports journalism at Northwestern University Medill School of Journalism, Media, Integrated Marketing Communications. He is also the graduate journalism Sports Media Specialization leader. Adande has worked in sports media for over two and a half decades, including multiple roles at ESPN and 10 years as a sports columnist at the Los Angeles Times, in addition to jobs at The Washington Post and Chicago Sun-Times. He has covered a broad array of sports and events, including 20 NBA Finals, Super Bowls, the World Series, the Stanley Cup finals, the Olympics, the World Cup, Wimbledon, the U.S. Open, and the Masters. He continues to appear on ESPN’s Around The Horn, where he has been a panelist since the show’s beginning in 2002.

Glenn Stout served as an editor for the Best American Sports Writing series for 30 years. He is the author of several books including The Young Woman and the Sea, Fenway 1912, and Tiger Girl and the Candy Kid.