Your Mother's Not a Virgin!: The Bumpy Life and Times of the Canadian Dropout who changed the Face of American TV! (Paperback) 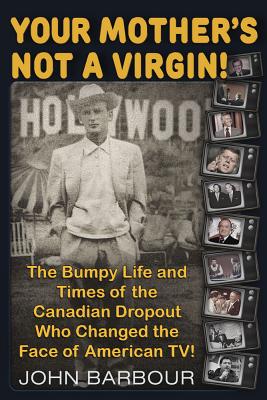 Your Mother's Not a Virgin!: The Bumpy Life and Times of the Canadian Dropout who changed the Face of American TV! (Paperback)


Email for availability
A high school dropout at 15, and deported from Canada at 17, John Barbour is recognized as "the godfather of reality TV" for his role as the creator, producer, co-host, and writer of the trendsetting hit Real People. He won the first of his five Emmys as the original host of AM LA in 1970, where he interviewed controversial anti-war guests like Mohammed Ali, Cesar Chavez, and Jane Fonda. He was the first in America to do film reviews on the news, winning three more consecutive Emmys as KNBC’s Critic-At-Large. He spent ten years as Los Angeles Magazine’s most widely read and quoted critic and early in his career, he made stand-up comedy appearances on The Dean Martin Show, The Tonight Show, and others. In 1992 he wrote and directed the award-winning The Garrison Tapes, which Director Oliver Stone heralded as "the perfect companion piece to my movie, JFK." In 2017 he wrote and directed part two: The American Media and the Second Assassination of President John F. Kennedy, which was applauded as "the definitive film on JFK and the rise of Fake News." In this highly entertaining, deeply informative autobiography, readers will discover what a multifaceted storyteller Barbour is.
John Barbour changed the face of American television as the creator, producer, principal writer, and co-host of Real People, television's first reality show. He is a five-time Emmy award winner, a storied actor and performer, a joke and script writer, and entertainment professional across genres.
"More than a few months ago I received a copy of 'You're Mother's Not A Virgin' written by John Barbour, a man who I am proud to call a friend. At 700 pages plus, the idea of reading it seemed quite overwhelming...and it sat on my bedside table...taunting me for quite some time. Recently, though, I began to read. And kept reading. And read some more. Until...just 2 1/2 days later when I finished the book. When finished, I couldn't wait to speak with John...and on the phone I told him that even though I laughed out loud (literally) and had shed more than a few tears while reading, I was angry at him. I was angry at him for not writing this book sooner. I would have liked to have read this book thirty years ago...for a number of personal reasons. If ever there was someone who would be completely justified to feel bitter about their circumstances or their lot in life, having been dealt only four cards in a game of five card stud...it would be John Barbour. Yet, I have never heard one word...not a single utterance from John himself that would suggest that he has ever been a victim of anyone or anything. This is a collection of stories and tales and remembrances...some sad...some funny...all true. Stories about Frank Sinatra, Johnny Carson, Redd Foxx, Lenny Bruce, Jane Fonda, Dean Martin, Lucille Ball, George Burns and many others will have you laughing and leave a smile on your face. But this is more than a collection of fond recollections and witty anecdotes. This is a story of survival. Perseverance. Getting knocked down...but, more importantly, getting back up. And, to paraphrase Polonius...staying true to yourself and believing that you have something of value to offer...even and especially when no one else thinks so. For my friends that are readers, I encourage you to give this one a read." — Jeff Arbaugh, Actor and Ownerat Perfect Point, LLC

"Your book is an absolute knockout. Thank you for the gift of your Life. Your incredible memories. Your experiences. Your adventures. Your candor. Your talent. Your insight..and your powers of observation. My wife Shelley and I took turns reading it to one another. Our love to you. Mike." — Mike Farrell, an American activist, public speaker, actor (best known for his role as Captain B.J. Hunnicutt on the television series M*A*S*H), and producer of Patch Adams starring Robin Williams

"WE LOVED THIS BOOK!! Shelley and I took turns reading this tome to each other, crying and laughing along with every step of John’s astonishingly honest, insightful and courageous journey. His breathtaking candor, his outrageous talent, the unfailingly straightforward way he deals with all who cross his path - the stars, the wannabes, the crooks, the hopefuls, the heels, the hopeless, the thieves – left us charmed and gasping. At first stunned at the cruelty a parent can inflict on a child but quickly inspired by that child’s unwillingness to bend, let alone be broken by it, is enough in itself - but not for this guy. His insistent belief that there is something better out there fueled his willingness to go on, and on, in pursuit of his dream. And in realizing that dream, no matter the cost, he lets us know it is possible. Do not miss John Barbour’s Your Mother’s Not A Virgin!” —Shelley Fabares and Mike Farrell

"As a celebrity journalist in Las Vegas, I have interviewed well over a 100 A-list entertainment and sports figures, politicians, news anchors, business moguls and philanthropists. I also read a lot of books, and am writing one myself, so I know the hard work that goes into creating a captivating story. When I first saw the heft of John's book at over 700 pages, I couldn't imagine the time and energy that went into recalling and retelling one's own life. To be honest, the book sat in a pile for a month. Then one day I picked it up and from page one I was hooked. I read it every spare chance I had. I read it every night before I fell asleep. I've never read a book that made me laugh and cry. Every chapter had me spellbound. Starting with John's difficult childhood in Canada and his great desire to come to America to being deported and managing to come back twice. His career path was filled with lots of rejections, and each time John pulled himself back up and kept going. What a lesson in perseverance, forgiveness for those that did him wrong, and keeping a positive attitude that would have made most people bitter or depressed. Whether in Toronto, London or Hollywood, the stories are spellbinding. I cried when he reunited with his estranged father who deserted the family. I laughed at the exchanges he had with the talented, intellectual, heroic and sometimes controversial guests who appeared on his TV show, including Jane Fonda, Mohammad Ali, Ronald Reagan and Cesar Chavez. It didn't matter who it was, John Barbour was always truthful and true to himself whether he was dealing with Frank Sinatra or the head of the TV network who employed and then fired him. John Barbour is a man with a conscience and a man who stands up for what is right. He is a rarity in this world where many people value money above all else. I am honored to know John Barbour and call him a friend. This book will entertain, inform and inspire you. I couldn't believe that after 700 plus pages, I didn't want it to end. Bravo John for such a daunting undertaking. You told your story of a life well-lived with such amazing detail. It is thoroughly engaging. I wish there were more principled men like you in the world. I have the utmost respect and admiration for you. You have a brilliant mind, a huge and generous heart, and a sincere spirit." —Marsala Rypka, Celebrity Scribe