Pope Francis Takes the Bus, and Other Unexpected Stories (Paperback) 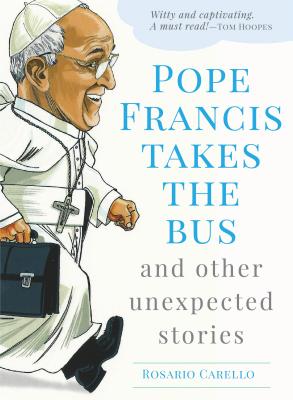 By Rosario Carello
$14.99
Available from Our Distributor (Not in Store)

The whole family will enjoy these charming, real-life stories from the life of Pope Francis. Following a quirky A-to-Z format, the eighty lighthearted anecdotes in Pope Francis Takes the Bus are full of warmth and humor, revealing the simple humility of the man whose spirituality and concern for others has transformed the Church and captured the imagination of Catholics and non-Catholics alike. In only the first year of his pontificate, Francis has already reinvented the very role of pope and bishop of Rome. His less formal style of dress, his choice to live at the Casa Santa Marta, his use of a small car in place of a limousine and his frequent personal phone calls to friends and even complete strangers are everyday manifestations of a larger understanding of Christ's message--one that emphasizes humility, mercy and care for the poor and suffering. What we can see in Pope Francis is a radical change in priorities, one that is being declared in his words but also evidenced by his actions and personal way of life. Pope Francis Takes the Bus contains stories and episodes from various stages in his life: as the parish priest known as Padre Bergoglio, then later as rector, bishop, archbishop, cardinal and finally, pope. Italian author and radio personality Rosario Carello's collection will help readers gain a clearer picture of Pope Francis--and will serve as inspiration for anyone seeking a humbler, more Gospel-guided daily life.

Rosario Carello is a popular Italian religious journalist and radio personality. He founded the weekly In His Image newspaper in 2009, and has been writing a commentary on Pope Francis's weekly Angelus messages since 2013. He lives with his wife and daughter in Perugia, Umbria.