Teletubbies - On the Screen and Behind the Scenes (hardback) (Hardcover) 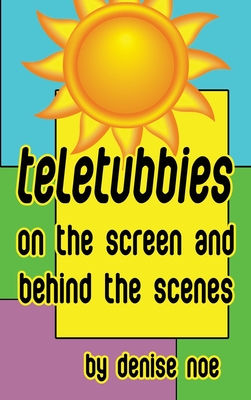 Teletubbies - On the Screen and Behind the Scenes (hardback) (Hardcover)

TELETUBBIES ON THE SCREEN AND BEHIND THE SCENES is a book that more than lives up to its title. Here is the entire story of Teletubbies. Denise Noe shows the reader the seeds that sprouted in the minds of Andrew Davenport, whose fascination with the space program led him to imagine overgrown space babies, and Anne Woods, whose response to watching Power Rangers kicking each other was to create characters who would hug instead of fight. Noe shows us how the dilemma of bringing the real world into the fantasized Teletubby world led to a solution of genuinely inspired creativity. Noe tells how performers took tiny bits of themselves into these wonderfully wacky characters as well as how cast and crew coped with difficulties imposed by oversized, bulky costumes and the occasional bout of turbulent weather. She takes us behind the scenes with a cast that included not only professional actors and actresses but "everyday" people who appeared on the famous "tummy screen films" in documentary-style episodes about their lives.

Not all was sweetness and light in the making of this TV show. Noe shows the pain suffered when an actor playing a Teletubby found himself replaced. She also discusses the controversies that swirled around Teletubbies, going into depth about both the accusation that the show was a "dumbing down" of children's TV and the idea that the purple Teletubby, Tinky Winky, represented a gay man. This book is both a history and a celebration of Teletubbies.

"Denise Noe has worked hard and succeeded in putting together an excellent read for all Teletubbies fans."
- Jane Lambert

"A detailed insight into the world of Teletubbies. Right from how it all began up until the latest reboot, this book covers it all. Really see behind the smoke and mirrors and discover how these lovable characters come to life."
- Neal Patel

"Ms. Noe has written a wonderfully researched and insightful view of Teletubbies. The reader will learn a great deal about the behind the scenes work and activity that helped make Teletubbies such a beautifully unique show."
- Rolf Saxon