Now Is the Time for Running (Prebound) 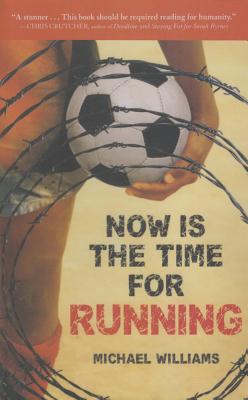 By Michael Williams
$21.80
Email or call for price.

Just down the road from their families, Deo and his friends play soccer in the dusty fields of Zimbabwe, cheered on by Deo's older brother, Innocent. It is a day like any other... until the soldiers arrive and Deo and Innocent are forced to run for their lives, fleeing the wreckage of their village for the distant promise of safe haven in South Africa. Along the way, they face the prejudice and poverty that greet refugees everywhere, but eventually Deo finds hope, joining dozens of other homeless, displaced teens on the World Cup Street Soccer team--a possible ticket out of extreme hardship to a new life.
Captivating and timely, "Now Is the Time for Running" is a staggering story of survival that follows Deo and his brother on a transformative journey that will stay with readers long after the last page.

Michael Williams is a writer of plays, musicals, operas and novels and the Managing Director of Cape Town Opera in South Africa. He began writing "radio plays" while studying at University of Cape Town and had his first novel published when he was twenty-five years old. He has written operas for young people based on African mythology as well as the libretti for symphonic operas that have premiered around the world. Michael is the author of several books, including the highly praised young adult novel "Crocodile Burning." He finds writing fiction to be the perfect antidote to the drama of keeping an opera company alive in Africa.